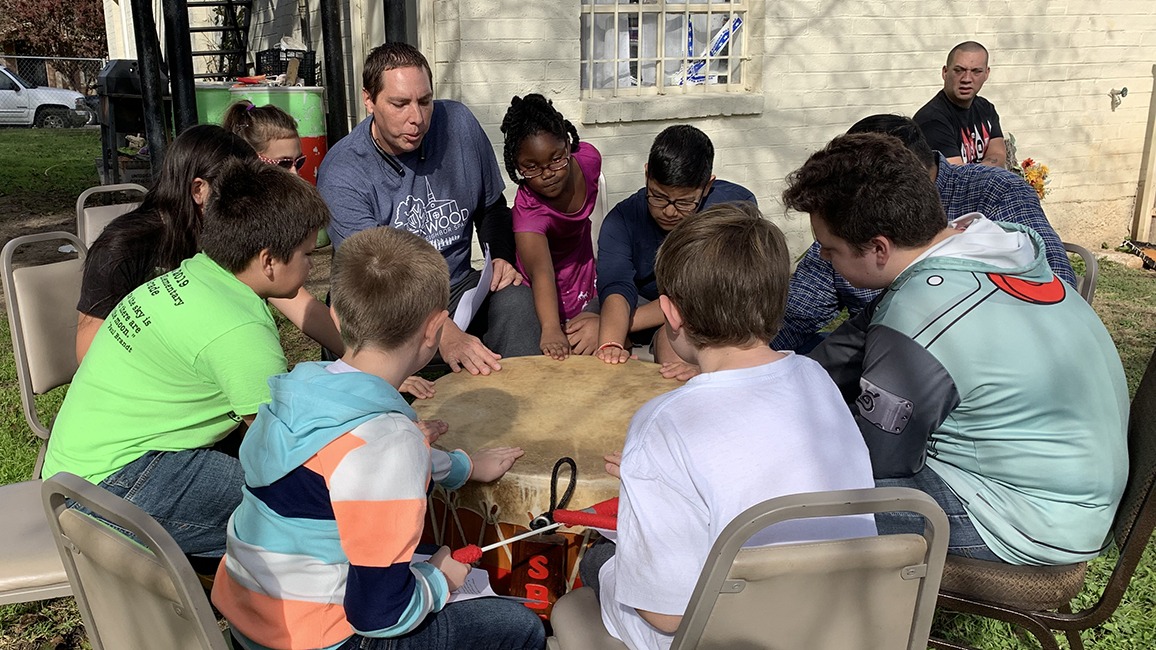 On a Sunday afternoon, youth gather around leader Michael Tongkeamha and a drum on the lawn of Dallas Indian Mission UMC. The group is meeting for drum practice for Soar Beyond Youth Inter-Tribal Drum & Dance Troupe.

The organization works with youth from different socioeconomic statuses, backgrounds and races with the focus of educating them on Native American traditions of drumming and songs. It accepts both indigenous and non-indigenous youth.

“The reason the group is open to all is we hope by teaching the Native American traditions, the kids will reach across and teach each other,” Tongkeamha said. “We hope these kids will make a difference and fight for social justice.”

Once everyone is in place and practice is ready to begin, Tongkeamha has everyone greet each other with a handshake before opening with prayer. Everything has meaning at the drum. Respect for the Creator, the drum and each other is expected.

Tongkeamha – a Kiowa descendant of Chief Sate imp-kia – said: “The drum instructs behavior. The drum corrects the kid because of the respect for culture and traditions.”

Tongkeamha began the group in March 2017 after spending time at Standing Rock during the Sioux tribe protest of the Dakota Access Pipeline.

“When I saw the atrocities at Standing Rock, I thought this was not the way to go,” Tongkeamha said. “It was important to see the direction of our future. The future is with our kids. We need to help them get a better footing.”

The Dallas Indian Mission UMC is supportive of Soar Beyond. Members and Rev. J.B. Jackson help the group whenever they can.

“Before this group, there was a gap in traditional ways and Christianity,” Rev. Jackson said. “Soar Beyond bridges the gap, and now we have a dialogue between traditional views and Christian views. This group creates a connection we can keep into adulthood.”

Said church member Rick Longfox, a descendant of the Choctaw, Assiniboine and Nez Perce tribes: “I come because I like sharing my life with them. It’s my way of giving back and honoring them. This is showing them the stepping stone to help the next generation.”

The drum is a central figure of Native American culture. Over the years, drums have many names and forms … but in Soar Beyond, it is called Grandfather. The reason, Tongkeamha said, is the drum shares the stories and insights of the past to help provide direction. The drum, for instance, helped Tongkeamha "soar beyond" years as a struggling juvenile delinquent.

The group performs Southern Plains inter-tribal songs for groups around North Texas and Oklahoma. Performances can be used as part of a sacred ceremony or an education on Native American traditions.