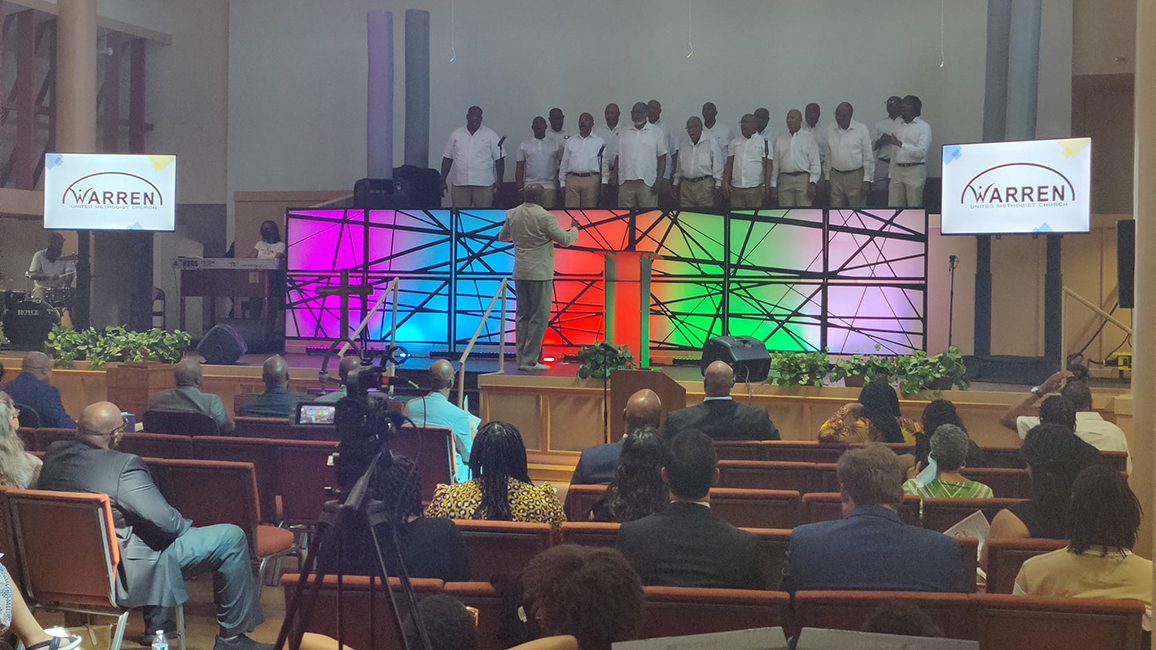 This November, one North Texas church is giving thanks for the restoration of their building. Warren UMC, which sits at the corner of Martin Luther King, Jr. and Malcolm X boulevards in South Dallas, has been an anchor in the community for generations.

However, significant problems with the building – including roof leaks, damage from the winter storms of 2021 and no air conditioning – kept the church closed for more than two years. On Aug. 28, 2022, Warren UMC marked its reopening with a joyous worship service and celebration.

Rev. Freddie Orr said: “When I was appointed in July 2021, we had been in COVID and everything had been shut down. Because of the situation with Warren UMC’s building, they hadn’t met together for over 18 months. We were in summertime, and of the six AC units, only two of them worked. So they had not gone back even as things were opening up.”

The mostly older congregation lives in communities where Wi-Fi is scarce, so many congregants could not access online worship. Orr recalled that he would only have about a dozen worshippers online during those days. So he quickly made it a priority for the congregation to find another place to gather in person safely.

In August 2021, Orr met with District Superintendent Rev. Edlen Cowley and together they brainstormed options. After reaching out to nearby community centers, conversation began with Dr. Fred Jones, director of Dallas Bethlehem Center, about using space for Sunday worship at this Methodist mission partner.

“Before we had that first worship [at Dallas Bethlehem Center], Edlen made arrangements for us to have a meeting at the auditorium at the African American Museum at Fair Park,” Rev. Orr said. “I called all the members and asked them to come and our District Superintendent would be there, and they could come and say what they wanted to say. He just sat there for an hour and a half and listened.”

By the third week of September, Warren UMC was holding weekly services at Bethlehem Center.

The United Methodist connection buoyed the community through this season of repair and restoration. Financial support from churches across the connection helped fix the broken AC units, while insurance and matching funds from the NTC Center for Church Development helped cover the $750,000  in repairs.

“What a blessing it is to be part of our connection when it comes to insurance and other things being taken care of,” Rev. Cowley said. “Warren’s story is a testament to our physical connection but also to this broader connection – a connection of ideas and a connection we have as a denomination.”

Warren’s new Senior Pastor Montreal Martin reflects on the experience of being at Bethlehem Center and the support of the United Methodist connection. “I think for Warren it allowed them to get outside their four walls, and to realize we are in a connectional system and they don’t have to do this by themselves. That's what really was voiced to me, ‘We’ve been doing this so long by ourselves.’ They were worshiping here without any AC since 2018. With the Bethlehem Center it allowed them to say ‘Hey somebody does care about us.’ ”

Pastor Martin has a vision for the church to be a place of empowerment for the community and to use the building Monday through Friday for GED classes, trainings and other programs. Recently, Warren UMC, in conjunction with ID Texas Impact and UNT law school, helped dozens of people restore their IDs and driver’s licenses.

That energy and hope for the future of Warren UMC was palpable at their reopening celebration in August. The goal was to raise $3,000 from the congregation to help fund the last AC repairs. They raised $4,100.

Rev. Orr is grateful to see a new chapter beginning for this historic church. “For a church that means so much to South Dallas, I was not going to let that happen, for this church to go away,” he said. “What gives me hope is the nucleus of the people that are still there. They love this church and they are going to fight for it.”