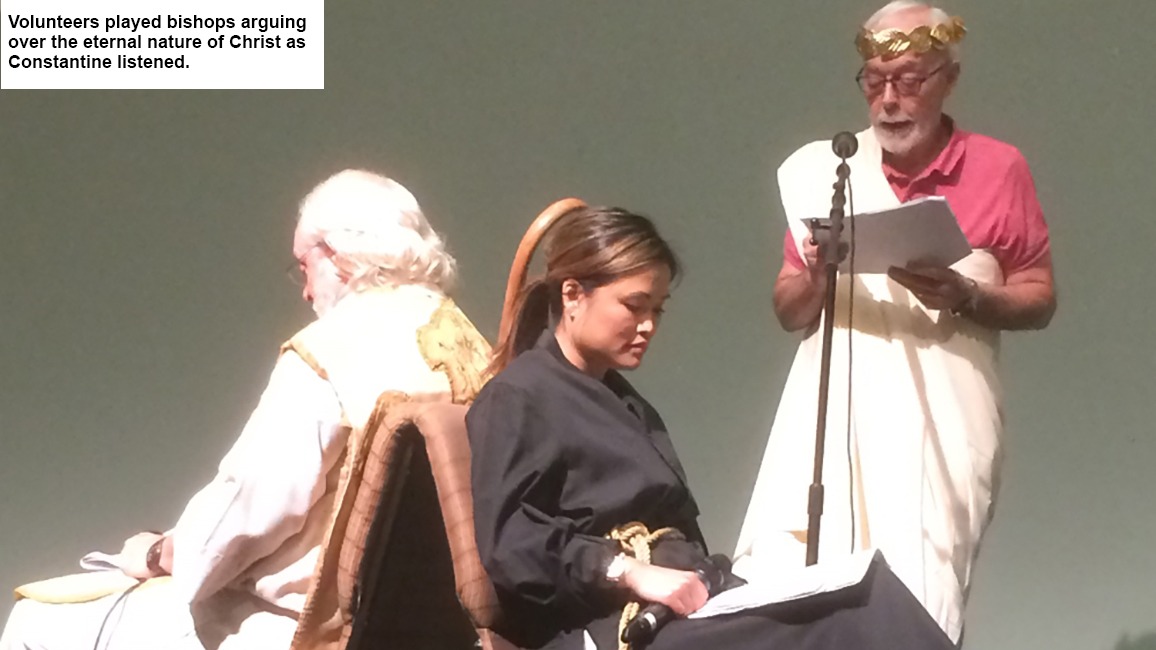 With an engaging mix of lecture, documents, audience skits and video, the Rev. Dr. Bill Bryan made his case for Constantine the Great as the most influential, or important, Christian since Paul. 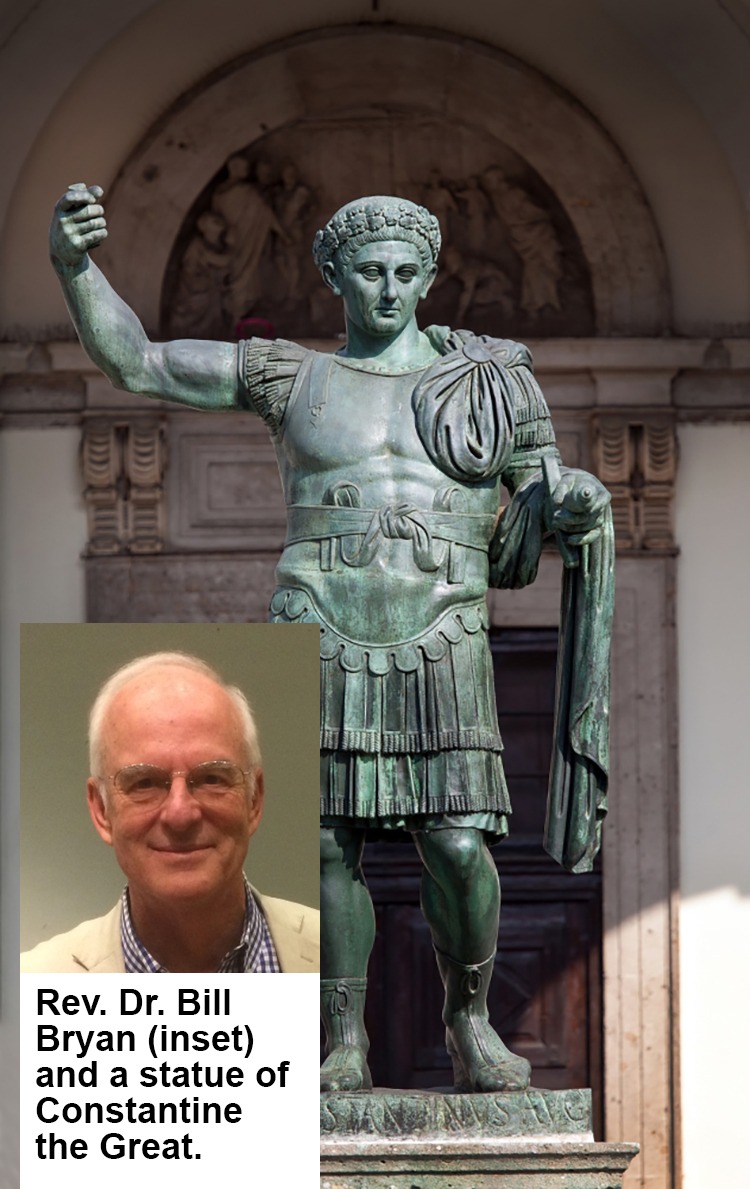 Many historians share his view of Constantine’s importance to the Christian church. The Orthodox Church even considers the Roman emperor to be the 13th apostle, honored each May 21 with a feast day.

Roman leaders persecuted Christians intermittently and with different intensity before the reign of Constantine. Possibly the worst period occurred immediately before Constantine ascended to the throne in the year 312. Churches were destroyed and Bibles burned, Christians lost their civil rights, and sacrifice to the gods was required under penalty of death.

In the early church, stories of martyrdom made for popular devotional literature. The narratives emphasized the brutal violence against Christians and the believers’ unshakable faith in Christ, even in the face of death.

Early churches were designed primarily to stay hidden from the authorities. They occupied small, secret spaces on side streets, with passers-by seeing only blank walls as they strolled by. Tucked inside were rooms for communion, teaching and baptism.

Constantine, the son of Caesar Constantius and a barmaid, rose through the ranks of the army and was leading his men through northern England when his father died in 306. Around this time, angels came to him in a dream, presenting him with a vision of a flaming cross and instructing him to paint the cross on his men’s shields.

He did as the angels commanded, and his men won what became known as the Battle of Red Rocks, defeating the armies of his five brothers to claim the unified throne.

But Constantine still had to deal with his barmaid mother, Helena, whose image lacked the sophistication expected of an emperor’s mother. So Constantine got her out of Rome by sending her on “the ultimate Antiques Roadshow” to buy sites and relics holy to Christians. She journeyed to Bethlehem, Golgotha, Ephesus, Calvary and beyond. Helena’s trip proved pivotal in moving the Christian Church and its sanctuaries from invisible in their communities to places of prominence. 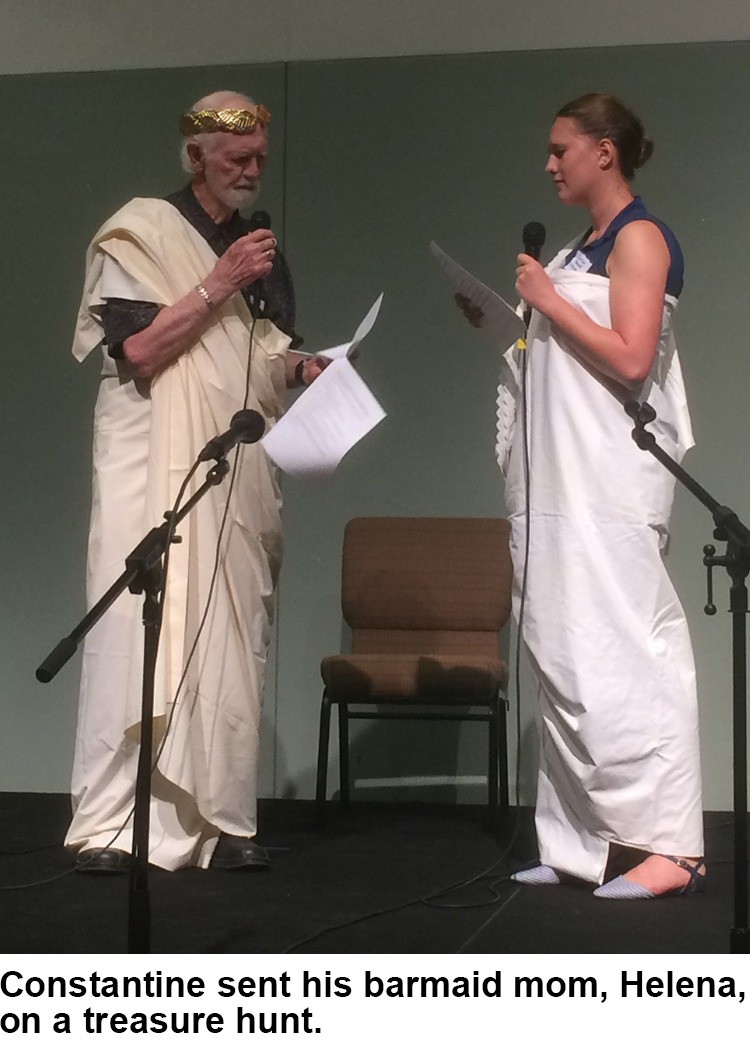 Constantine then decided churches should copy the design of Roman courthouses. Basilicas were massive on the inside and majestic on the outside. Made of beautiful materials and designed to showcase the power of Rome, they were also intended to make visitors feel small in the presence of judges. These imposing churches later became the ultimate power symbols in every aspect of society.

But division grew in the church during Constantine’s reign over the eternal nature of Christ. Mainline bishops argued that Jesus was like God, with no beginning and no end. A faction from North Africa held that Christ indeed had a beginning but no end.

To unify the empire, Constantine invited all 300 bishops to his vacation home in Nicaea to decide the nature of Jesus. The result was the Nicene Creed, which came down clearly on the side of the mainline bishops, declaring that Christ has no beginning and no end.

The original Nicene Creed also laid out punishments for those who didn’t follow it. They included a process called anathema, in which the state stripped offenders of all protections and even their names, making them ghosts among their own people. (Rather than dwell on the nature of Christ, the modern creed focuses on what it means to be a disciple of Christ.)

The Christian church also struggled to maintain unity while growing meteorically during Constantine’s 25-year reign. The Christian tenet to care for one another proved a significant factor in that growth, especially with believers tending to the sick while Roman officials fled during the two great plagues.

Christians also gathered up and cared for infant girls who had been abandoned by Roman parents who preferred sons. When those Roman sons grew up, they married the young women who had been raised as Christians, resulting in more Christian households.

As strong an influence as he was on Christianity, Constantine waited until he was near death in 337 to be baptized so that he could be sure to wash away all his sins. Dr. Bryan called this the “splash, wheeze-wheeze, croak” school of deathbed baptism.