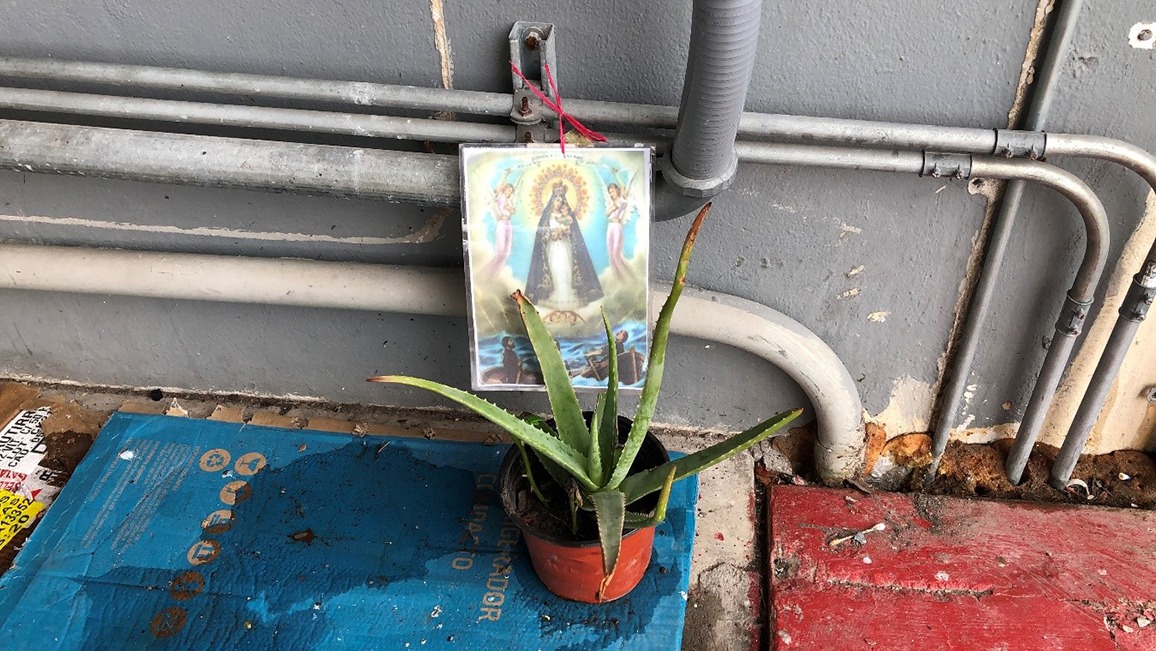 Altar at encampment in Matamoros, Mexico.

A woman and her young child waited in their tent at an encampment on the Mexican side of the bridge between Matamoros and Brownsville. They had endured a long journey and now were waiting to be called to move to the bridge and then wait again to be called from the bridge to the United States for an initial asylum hearing.

This process could take weeks or months and there was no guarantee that they would be granted asylum. In the midst of this hardship and uncertainty, the woman erected a makeshift altar outside their tent in the encampment.

This woman was one of the refugees we met when two teams, including Rev. Ann Willet, Rev. Holly Bandel and members and friends of First UMC Dallas traveled to the border. Our trips were part of the Courts and Ports initiative of Texas Impact/Texas Interfaith Center for Public Policy that was previously reported by First UMC McKinney.

Like the team from McKinney, we met with representatives of the ACLU, monitored hearings at the U.S. District Court for the Southern District of Texas, visited La Posada Providencia Shelter in San Benito, volunteered at the Sacred Heart Catholic Charities Humanitarian Respite Center in McAllen and met refugees waiting for initial hearings on the bridge between Brownsville and Matamoros.  We also visited a portion of the wall separating the U.S. from Mexico. 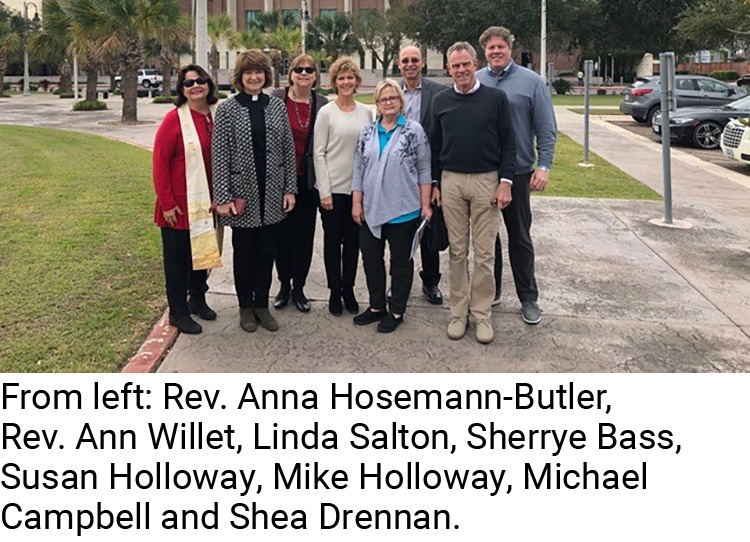 In court, we monitored the hearings for more than 70 individuals who had been arrested after entering the United States illegally. All were shackled and, except for five or six who had separate counsel, all had the same public defender. Nearly all of the defendants were from Mexico and Central American countries, and they shared with the court their stories of hardship and fear for their families if they remained in their home countries.

A few stated that they were requesting asylum and were turned over to immigration officials, where they could plead their cases of “credible fear.” All of the others were put on probation and would be deported. We were in court for over four hours and the visitors and court personnel were given a break to use the bathrooms, but the defendants remained shackled in the courtroom.

The Sacred Heart Catholic Charities Humanitarian Respite Center, run by Sister Norma Pimental, assists refuges who have been released from detention centers, have not yet been granted asylum hearings and will travel to be with family while awaiting those hearings. Two hundred fifty Hondurans arrived at the Center while we were there, and we assisted readying them for the bus ride to wherever their relatives were. One team member handed out shoelaces as those had been taken when the individuals were detained. Another volunteer assisted a 4-year old girl with a shower as the child was traveling with her father and he could not go in the shower with her.

On the bridge between Brownsville and Matamoros, Mexico, there is a tent sheltering those who have been called for initial asylum hearings but who have not yet been admitted to the United States for those hearings. At the time of our first team’s visit, there was a woman who had been on the bridge for 14 days. The tent has no bathroom facilities, and those who are sheltered there rely on religious and other groups to provide them with food and other necessities.

We provided a lunch of rice and beans, and some diapers. Although those on the bridge had already waited many days or weeks to be called for their interviews with United States immigration officials, no one was in the interview rooms on the U.S. side of the border when we crossed back to the U.S.

Both groups were moved by our experiences and want to do more. We believe it is important for us to advocate for changing a system that is back-logged and seems almost impossible to navigate, resulting in the suffering of those attempting to enter the United States. We will meet with immigration attorneys to better understand the current law and regulations and how we can effectively advocate for change.

It is clear to us that the humanitarian organizations on the border are providing vital services to those in need, and we will work with local organizations such as Justice For Our Neighbors and others to provide services to asylum seekers and refugees in the DFW area.

We will continue to share our experiences with our congregations and others in our communities and encourage others to participate in Courts and Ports.