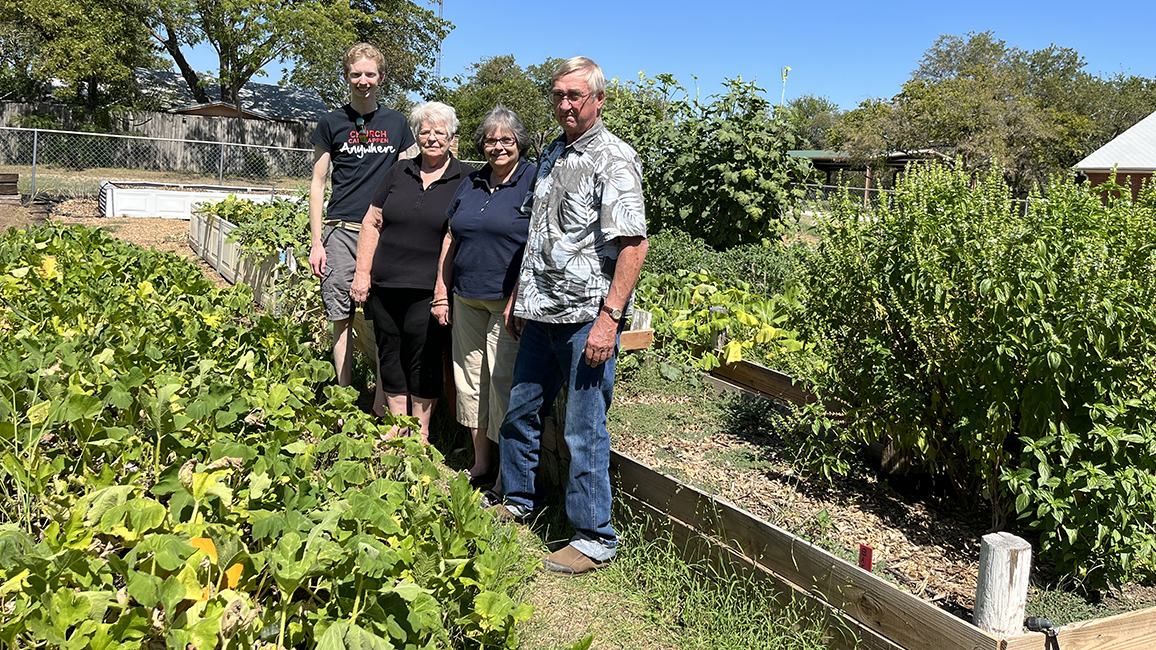 When the members of Rhome United Methodist Church realized it was time to take down their old swing set that had fallen into disrepair and lack of use, the question then became what to do with their 60-square-foot fenced in area. Church member Linda Ortberg recalled, “Someone suggested, ‘Let’s put in a garden,’ and everyone’s ears perked up.”

That was the beginning of what would become Vining Garden, a ministry that offers fresh vegetables and herbs free of charge to their neighbors. 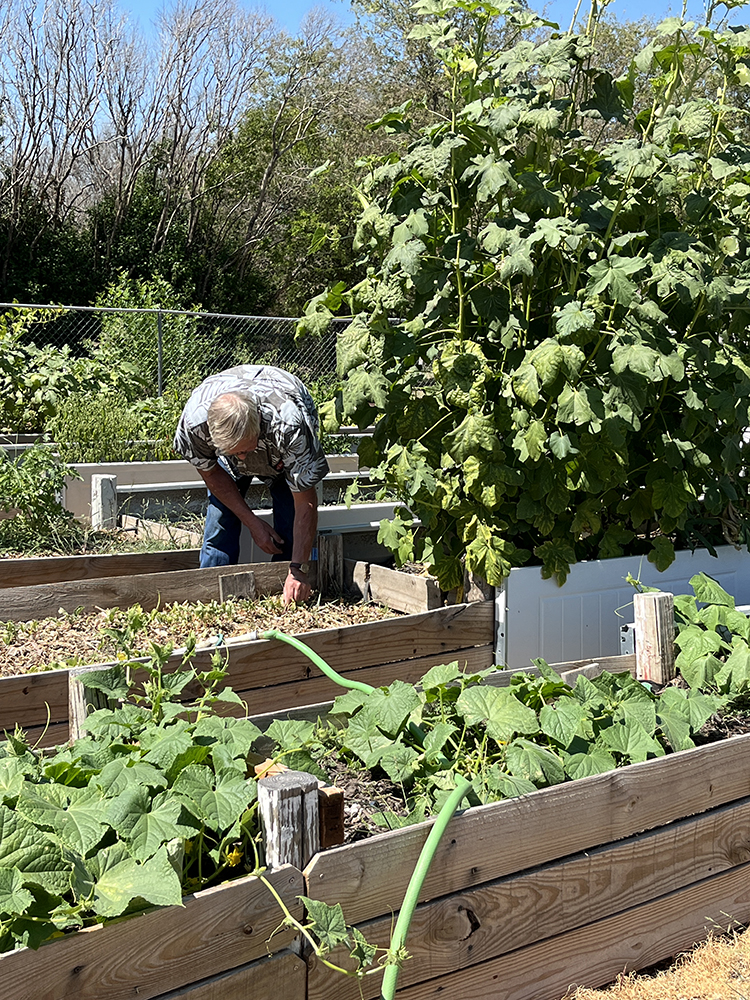 The vision of Vining Garden is to be a resource for families in the community who are food insecure and to grow relationships with neighbors in hopes of meeting both their physical and spiritual needs. Ten percent of the community lives in poverty.

“We know we’ve got some folks who are struggling, and they would never admit it, but we know the food helps them,” avid gardener and church member Gerry Lobdell said. “We have a lot of people who come for the fresh herbs to cook with and others who clearly have a need.”

Vining Garden received a $2,500 Ministry With grant from the NTC Center for Missional Outreach in the spring of 2022. With these funds, Rhome UMC has doubled the size of the garden and has more expansion plans. Rhome is about 50 miles northwest of Dallas, in Wise County.

Volunteer labor and donations have helped the garden flourish. A developer building houses near Rhome donated dirt and a Fort Worth garage door company donated garage doors that were used as frames for several of the raised beds.

Youth from First UMC Boyd, Rhome UMC’s sister church, planted a pumpkin patch so the church can invite families from the community to pick their own pumpkins this fall. The church also has plans to offer cooking classes for youth so they can learn how to use produce like fresh squash and okra. 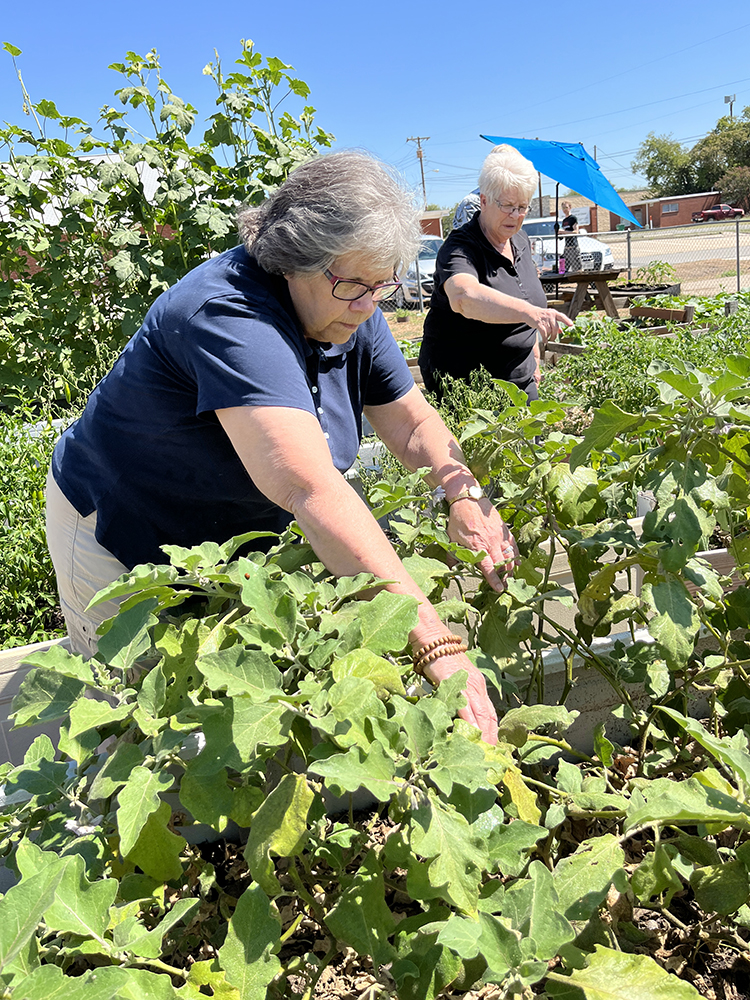 With the money that remains from the Ministry With grant and other funding they hope to secure, Rhome UMC plans to plant fruit trees, add beehives, build a small building that can store and display the produce and add on a porch for community events, such as open mic nights.

For Rev. Ricky Harrison, pastor of both Rhome UMC and FUMC Boyd, it's a testament to the congregation how willing they are to stretch into the community through Vining Garden, rather than using their empty lot to grow their building footprint. The congregation noted fewer young people seem to have an affinity for church membership.

“That kind of imagination is so rare,” Rev. Harrison said. “That kind of passion, vision, openness and foresight to be able to say, ‘Yes that might’ve worked for us before, but we need to pivot and do something different.’ And it’s that kind of spirit that has allowed us to do what we’ve been doing cooperatively with these two congregations. It’s one of the most externally focused congregations I’ve ever had the privilege of working with. That kind of spirit pervades here.”

While reaching their community in a new way, the congregation has also found renewed connection with one other as they work in the garden.

“It’s always been a great way for the church to come together,” Ortberg said. “In every church there’s always some divisiveness but when we come to plant some okra all that falls away and this unites us.”

For Lobdell it has added richness to her life as she tends to the garden. “I love sharing what I know. I love the gardening part and getting my hands in the dirt. It’s just fulfilled my life. My flowers at home are suffering because I’m here all the time! It’s been a blessing.”