Putting A Spotlight On ‘The Struggle For Justice’ 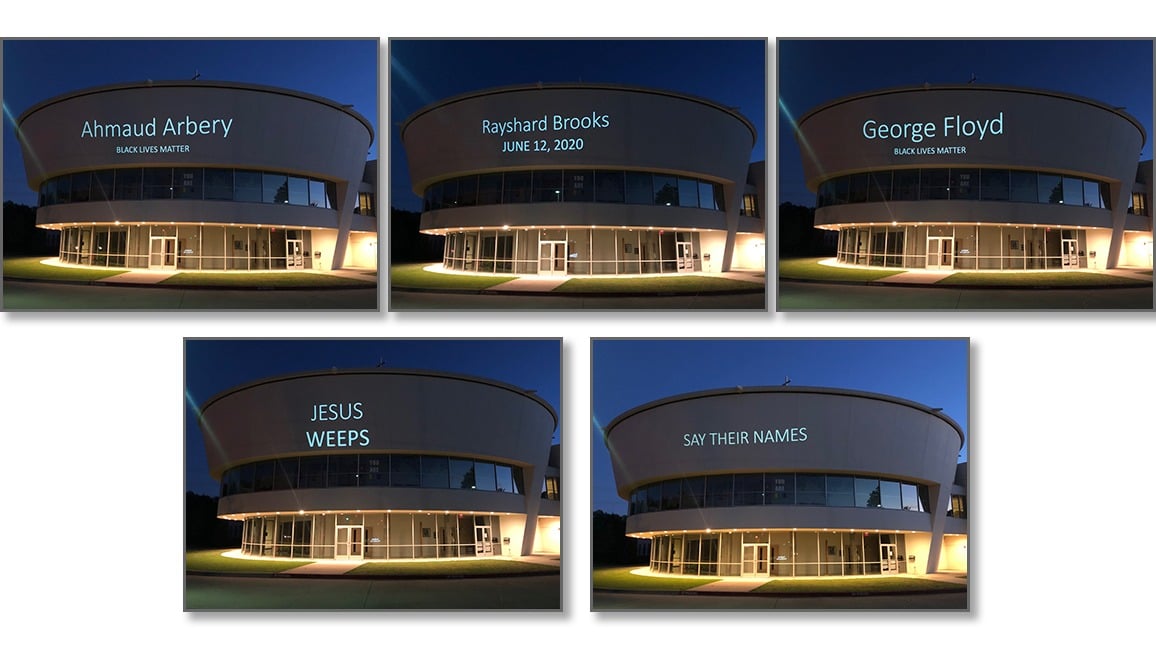 With its modern-architectural exterior, Northaven UMC fits in nicely with its surroundings in the tony Preston Hollow neighborhood of North Dallas. But for the last month – once the sun sets – this same building situated on the southwest corner of Preston and Northaven roads has become center stage for its own #BlackLivesMatter movement.

Social justice and activism have long been a part of this progressive congregation’s fabric, and George Floyd’s death in Minneapolis only stoked that fire. To wit: drive by after dark, and you’ll see prophetic messages such as “Jesus Weeps” and “Say Their Names” interspersed among the nearly 50 individuals who died in police custody or by racially motivated killings. 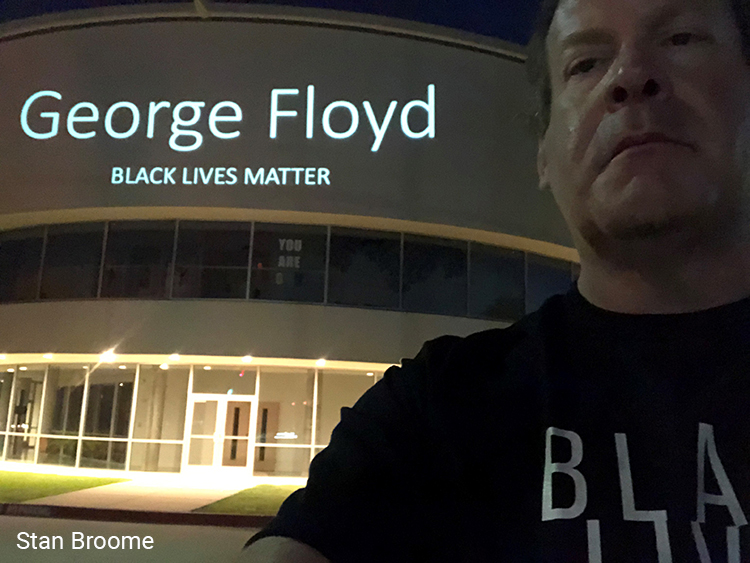 “This shows we can send a message to a community that probably otherwise will stay in their bubble and live in the status quo and not be exposed to anything uncomfortable,” said Stan Broome, a Northaven UMC member and local attorney who came up with the idea. “We want to make people think. We see our location as an advantage, because if you’re stopped at that red light, you can’t ignore it.”

It all started when Rev. Marti Soper, senior pastor at Northaven UMC, convened a committee of church members once the first protest happened in Minneapolis. Its singular mission: do something and do it fast.

The initial offering was a protest on the church grounds to accommodate people in the congregation who didn’t feel safe going to downtown Dallas because of their health, age or other factors. It was well-received and attracted participants ranging in age from 17 to 90.

“When we say the names, we are reminded that each of them had a story,” Rev. Soper said. “Naming makes this issue of racism a personal matter for all of us and helps us see the urgency that white people have been reluctant to embrace. My prayer is that this witness will help our community stay engaged in the struggle for justice.”

Broome pondered how they might expand the message’s reach. And then, Broome said, he wondered aloud how he could string together something similar that he’s seen done at hotels and larger-conference settings.

Armed with extension cords, a cheap projector, his laptop and a PowerPoint presentation, Broome would set up his show nightly around 8:30 p.m. He also set up his lawn chair and, for the first 2-3 weeks, sat outside about four hours each night to make sure everything went as planned and the equipment wasn’t ruined by the elements.

That first night, Broome said he was surprised that – from a technical perspective – it all worked. That was all the encouragement he needed to devise a permanent installation. In the last week, they’ve hired an electrician, installed a weatherproof box for the projector – which is now mounted on a lightpole – and run the presentation off an iPad. This allows for on-the-fly edits, such as including Rayshard Brooks’ name less than an hour after word began to spread about his death.

Broome said he was glad to have a front-row seat to the reaction his display elicited.

“While the overwhelming response has been positive, we certainly have had our fair share pull in and tell us in no uncertain terms how they don’t support that movement and that we’re on the wrong side of it,” Broome said. “That is encouraging to us, because if we’re not reaching those people, then what’s the point?”

Broome and his family have been in Dallas for 20 years and, until the last year, attended church of a different denomination. What prompted discussions of a potential church move was a question posed by Broome’s daughter on a trip to visit colleges in the northeast. She noticed a number of churches with Pride flags in front and asked him whether a church like that existed in Dallas.

Broome scoffed at that notion initially but, after his wife started doing research, the family found exactly what we were looking for in Northaven UMC: a church with a passion for social justice combined with the academic rigor and level of intellectual approach to God, the Bible and theology.

“Christ’s message is that we’re supposed to be fighting and giving voice to those who are marginalized,” Broome said. “If that’s not the message of justice, then people are missing that entirely. I don’t see how you can read the Bible and not see how we are called to help marginalized and historically disenfranchised people.”