A Pew demographer, a day-labor organizer, an educator on racism and Bishop Carcaño lead spirited discussions

The mood at the MARCHA conference in Dallas, marking the 25th anniversary of the National Plan for Hispanic/Latino Ministry, was a mix of the warm, festive, serious, educational and rallying as old friends and new acquaintances greeted each other, exchanged opinions or cheered on the speakers. 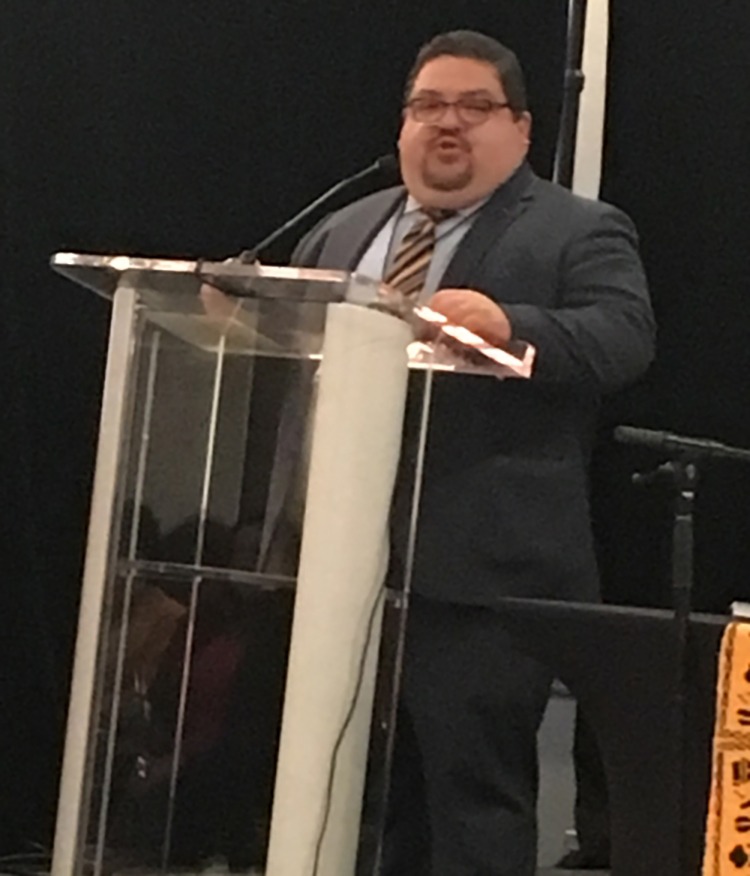 There were 57.5 million Hispanic/Latino people living in the U.S. in 2016, up from 9.6 million in 1970. Today, 1 in 5 Americans are of Hispanic/Latino origin. Of the Hispanic/Latinos in the U.S., 63.3 percent are of Mexican descent, followed by Puerto Rican at 9.5 percent. The Salvadoran and Cuban figures jockey back and forth for No. 3 and 4. See his slideshow here.

The presidential election of 2016 represents the story of diversity, as many Hispanic/Latinos — especially Cubans — voted for Donald Trump knowing his immigration stand. Just under half of eligible voters, 47.6 percent, cast a ballot in 2016, essentially flat from the 2012 election. The split between party votes was virtually the same as in 2012, roughly two-thirds Democrat and just more than one-quarter Republican.

The use of English is trending higher, and 71 percent say it is not necessary to know Spanish, especially as more households speak English only.

“We are creating a new identity of what it means to be of this origin,” Lopez said.

In religious affiliation, 55 percent identify as Catholic, a number that is in decline. The growth is in Protestantism and no affiliation. Twenty-eight percent of Hispanic/Latinos ages 18 to 29 say they have no affiliation, the same as other races and a general youth trend. 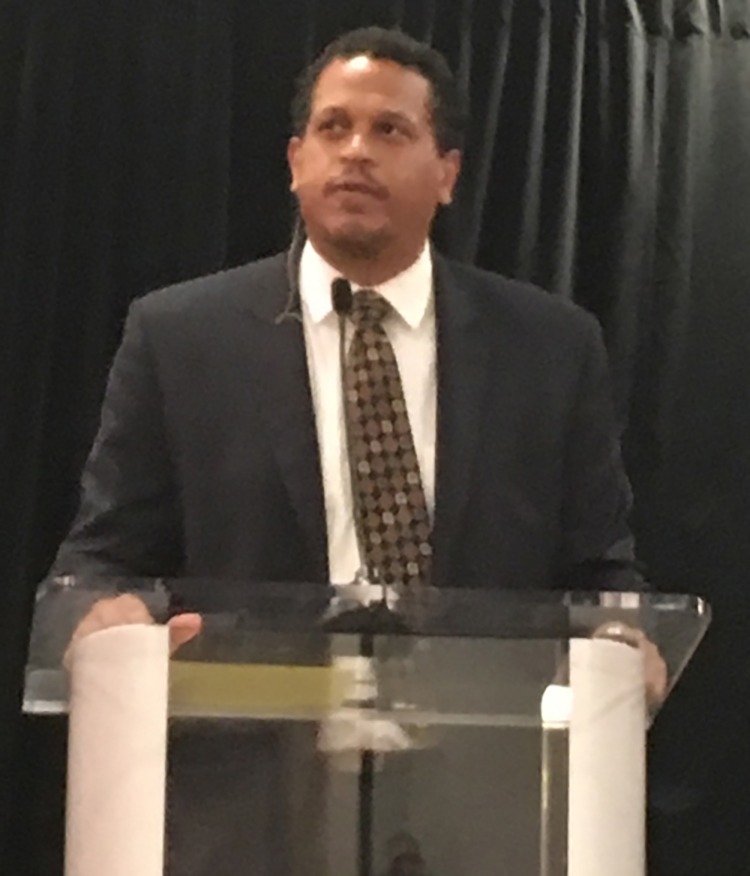 President of the Chicago Principals and Administrators Association

Race is a relatively new idea in human history, LaRaviere said in an overview of prejudice and racism. In the early 1600s, Africans and indentured European servants worked side by side and even intermarried in a young America, he said. In some cases, Africans became landowners who imported indentured Europeans. Bacon’s Rebellion, in which indentured whites and Africans rose up together against poor treatment, led to a crackdown by the ruling class and the hardening of the slavery system. It sought to divide poor whites and blacks.

Prejudice, he said, are the beliefs people have about others. Racism is acting on those beliefs.

He gave some examples.

One night, LaRaviere, then a 38-year-old assistant principal, went through “a light that might not have been yellow.” An unmarked police truck zoomed past him, pulled in front of him and got him to stop. The officer flashed his badge, grabbed LaRaviere’s keys and threw them down, and put his hand on his gun. “A gun? Really? For a traffic stop?” LaRaviere thought. LaRaviere then asked politely if he could move the car so it wasn’t blocking traffic. Once the officer saw that LaRaviere was dressed in a suit, he turned cordial and said, “You’re not who I thought you were.”

In orchestra auditions, women were not getting to the finals no matter how proficient they were at their instruments. Fearing it might be prejudice, the orchestras began holding blind tryouts by putting up screens so that they could not be seen. Still, women — no matter how highly trained — were not making it in. Then at one of the auditions, someone noticed the clicking sound of their heels. So the women took off their shoes before the blind auditions. The number making it to the finals and ultimately getting positions skyrocketed.

“Prejudice is an illness, and we are all infected,” he said.

Bishop Carcaño discussed the institutional challenges facing The United Methodist Church, tying it to the era of President Donald Trump.

Nothing drives global migration like poverty, as people seek to move to feed their families, she said. The institutional challenge for the church is to commit to dealing with the poverty and to work with people “where they are.” She called for the National Plan to work on poverty but said the problem is too large for it to do it alone.

“We need to reconsider our very expensive models of local church ministry and church planting and how we equip or do not equip persons to share the good news of Jesus Christ,” she said.

But a middle-class church moving away from a neighborhood fallen on hard times sends the wrong message, she said. An institutional challenge for the church is to see beyond class, she said.

After telling about the church of her youth investing in her as a future leader, she said United Methodists today need to “reorient our thinking about money, about resources and our investments. We are not a poor church. We need to let go of our scarcity mentality in order to see the abundance of God’s gracious mercy upon us, a divine investment that extends to every single one of us.” 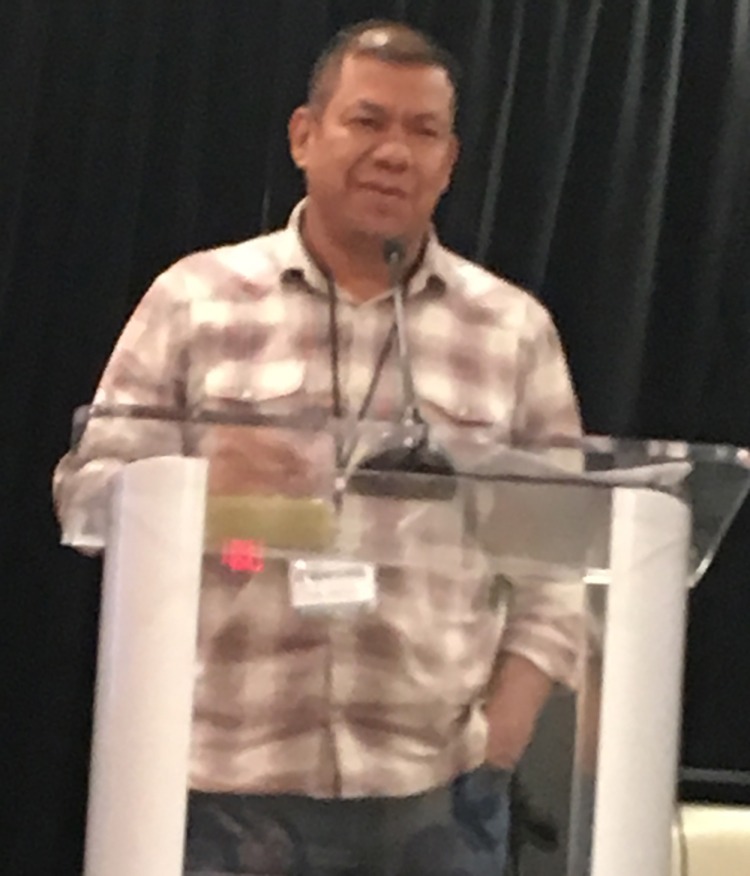 “I’m an organizer, I’m an activist. Because of my upbringing and as an immigrant, obviously my understanding of reality is biased,” Alvarado said. But his is a “part of the American story, the American experience.”

Alvarado grew up in a peasant family as civil war gripped El Salvador and split his village of 700. His father was paramilitary, but the children backed the other side.

At 12, Alvarado found his heart for the poor after joining a Jesuit study circle, and Monsignor Óscar Arnulfo Romero y Galdámez, the archbishop of San Salvador, became his hero for speaking out against poverty, social injustice, assassinations and torture. That year, 1980, Romero was assassinated.

At 22, coming home from his last day of college in 1990, he found his family huddled together after his brother, 17, received a death threat. “It was not like I had a choice,” he said. He and the brother left the following day for the U.S.

They ended up in Los Angeles, learning enough construction skills to build a house from scratch. But he was appalled at the treatment of the immigrants. The men standing on corners hoping for work “have defied every single obstacle” and yet endure uncertainties daily — will they will get hired, get paid or get stiffed, suffer injuries or be chased off by police or security guards?

In 1996, Los Angeles and Northern California soccer players began exchanging tips on the field — what to do if an employer doesn’t pay, police force them off corners and other advice.

“That’s how NDLON was born, in the middle of a soccer field,” he said.

The group has established 65 day-labor centers, “safe environments” where workers can gather. Translators handle the bargaining so that laborers are ensured pay and hirers get quality work — “a win-win.” But on 700 other corners, workers still take their chances, Alvarado said. NDLON has fought for workers’ right to stand on the corners, going to court against ordinances in 20 cities and earning a significant victory when the U.S. Supreme Court wouldn’t hear an appeal by Redondo Beach, Calif.

“Humble people can become agents of change even if they don’t know how to read and write,” Alvarado said. “I think that’s what Jesus wanted. That’s the convergence between my organization and the Methodists. … Can you adopt one of those corners to outreach the workers and bring the word of God?”