Making Inroads In The Process Toward Citizenship 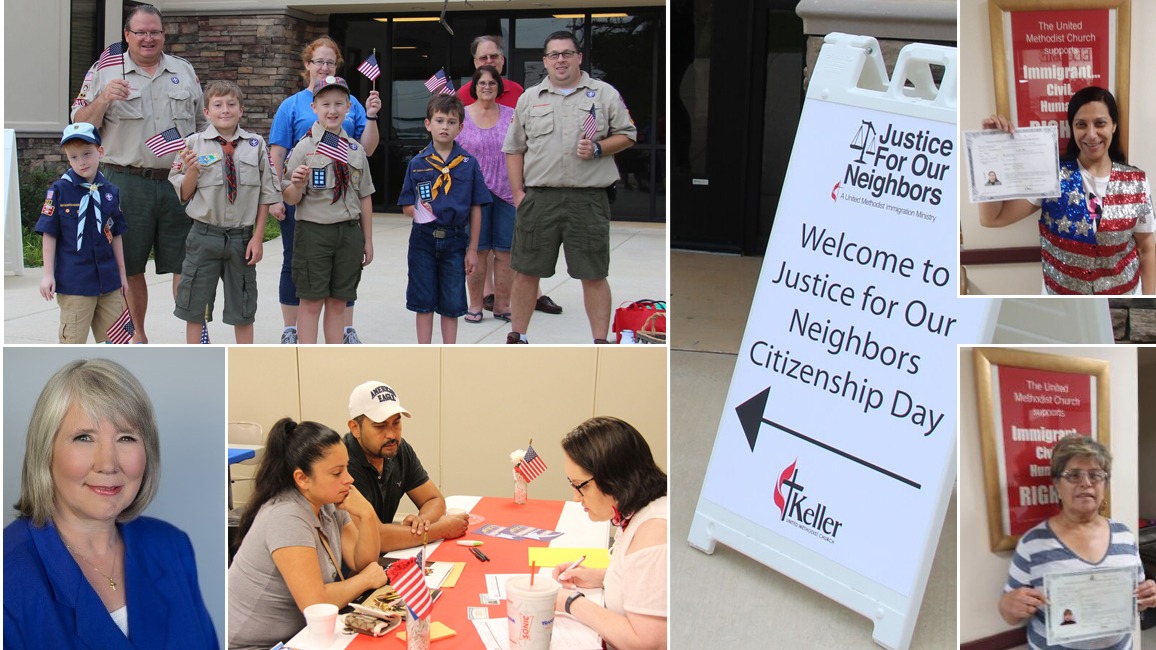 The upcoming Citizenship Day at First UMC Coppell is modeled after a similar event that took place at Keller UMC in 2017 to help eligible permanent residents become citizens. Boy Scouts served as the welcoming committee and volunteers helped to complete applications. Graham Bateman (lower left) is the executive director of JFON DFW.

Since 2017, First UMC Coppell’s Church and Society Team has discussed issues surrounding The United Methodist Church’s Social Principles. Team members have educated both themselves and the congregation and have sought ways to involve the community.

This year, the team chose immigration … which led them to the local chapter of Justice for our Neighbors (JFON). As a result of that introduction, the two groups are partnering together to host a Citizenship Day gathering from 10 a.m. to 2 p.m. Saturday, Oct. 26, at First UMC Coppell. Dallas County Judge Clay Jenkins is expected to provide remarks as well as other local politicians. In addition, the church is seeking entertainment to help create a patriotic atmosphere.

Citizenship Days are hosted by the American Immigrant Lawyers Association to help eligible legal permanent residents prepare and apply for U.S. naturalization. Volunteers and attorneys donate their time to help legal residents fill out applications for citizenship for free; this service would usually cost at least $1,000.

Citizenship Day is open to legal residents seeking citizenship. If you know someone who is interested in learning more, call Graham Bateman at 225-937-8195 or visit the JFON DFW website.

Planning for this event began months ago following a discussion with Graham Bateman, executive director of JFON DFW.

“She opened our eyes to the complexities of immigration and how expensive it can be to seek citizenship and refuge in the U.S.,” committee chair Melissa Potter said. “We wanted to find a way to help. When she told us about Citizenship Day, we knew it was the perfect fit.”

“Everyone in my family is a Marine. I was raised with the American flag and patriotism, and that this is the greatest country on Earth,” she said. “It is a joy and privilege to help others become citizens.”

Bateman becomes family to those she helps and shares their stories with others to help them better understand immigration issues.

Bateman first told the story of Maria, who is in the process of seeking citizenship. She is 68 years old and has been a legal permanent resident for 25 years. All of Maria’s grandchildren are in the United States, so she believes America is her future and wants to become a citizen.

Bateman also shared the story of another participant, a refugee from Africa named Joseph. He came to America after fleeing his war-torn country and has been here for five years. He is seeking citizenship as soon as possible because he is grateful to this country for giving him refuge.

“Volunteers become a part of theses families’ histories and become something they will talk about for future generations. Most of us don’t get that opportunity very often,” Bateman said.