Magruder to be honored for work to end death penalty

Rev. Dr. Wes Magruder, senior pastor of Kessler Park UMC, will receive the Founder’s Award from the Texas Coalition to Abolish the Death Penalty on Feb. 17 at the group’s annual conference in Dallas.

Dr. Magruder, a member of TCADP since 2011, stood out for several reasons, the organization said — among them a pilgrimage that he and two other death penalty opponents took, walking from Dallas to Fort Worth, and for presenting a successful resolution at the North Texas Annual Conference calling on churches to push lawmakers to end capital punishment. 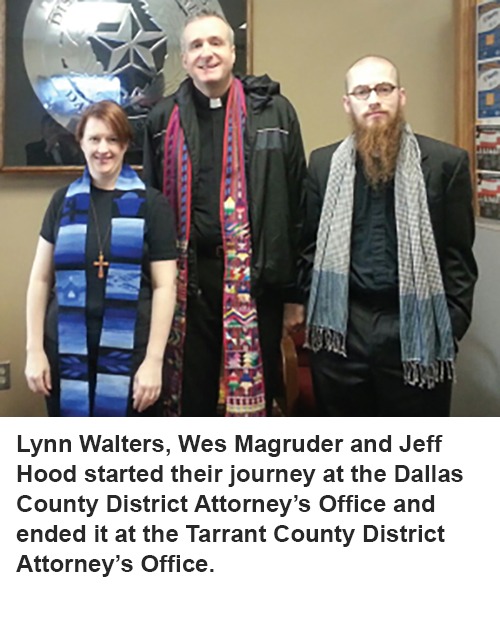 “It’s been in my blood for a good long while,” Dr. Magruder said. After seeing the 1988 movie Dead Man Walking, about a nun and her relationship with a death row inmate, he was inspired to learn more. He read the works of the nun, Sister Helen Prejean, and began to see ending the death penalty as a goal achievable in his lifetime, “whereas with other social justice causes you are in it for the long haul.”

“I’ve never understood why we have a death penalty. It’s a moral contradiction in terms to me,” he said. The United Methodist Church also opposes the death penalty.

He is optimistic that capital punishment is on the way out, with fewer district attorneys seeking the death penalty against defendants.

“It’s not only immoral, but it’s expensive and it’s not perfect,” he said.

The Death Penalty Information Center lists 161 death row inmates who have been exonerated and freed since 1973.

In 2014, while Dr. Magruder was the chairman, the North Texas Conference’s Church and Society Committee took up the death penalty issue.

In February that year, he undertook the 32-mile pilgrimage with TCADP board member Jeff Hood and Lynn Walters, executive director of Hope for Peace & Justice, to draw attention to the cause. The day started with them presenting a petition to Craig Watkins, who was Dallas County district attorney at that time, asking him to quit seeking death convictions. It ended 12½ hours later in Fort Worth at the office of Joe Shannon, then the Tarrant County DA.

In June 2014 at the North Texas Annual Conference, he presented the resolution calling on churches and lay members to push their local and state representatives to end the death penalty in Texas. The resolution also called for all clergy to sign the Interfaith Statement of Opposition to the Death Penalty.

“I was prepared for some push-back,” Dr. Magruder said. “I remember one argument against it. It passed overwhelmingly, which really warmed my heart.

“I’m very proud of the United Methodist stance on the death penalty. As a denomination, it’s a very strong stance.”