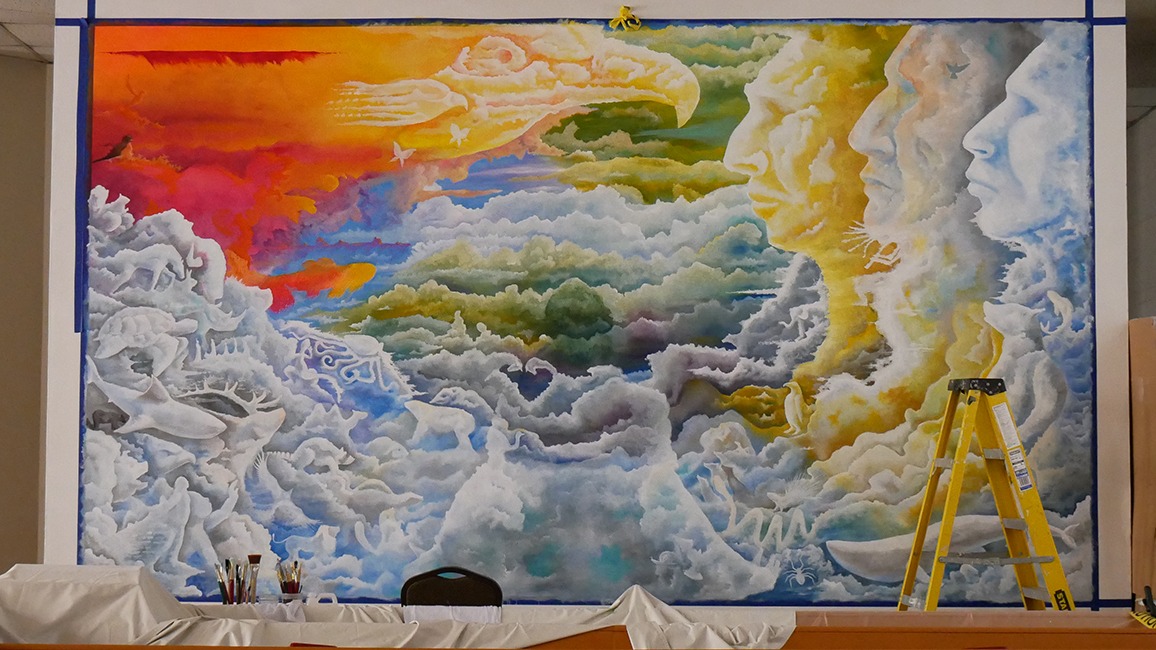 On a quiet corner of the Hampton Hills neighborhood in south Dallas sits a simple building from 1960 that’s home to the Dallas Indian United Methodist Church. Inside, a powerful 20-foot by 25-foot mural is taking shape inspired by the Holy Spirit and love for the community that gathers here each week.

Rev. J.B. Jackson first approached Damon Neal, a Native American young artist who grew up in the church, about the mural as a way for Damon to use his artwork to heal during a season of grief. Damon lost his brother to COVID last July, and his father died of a heart attack in January. 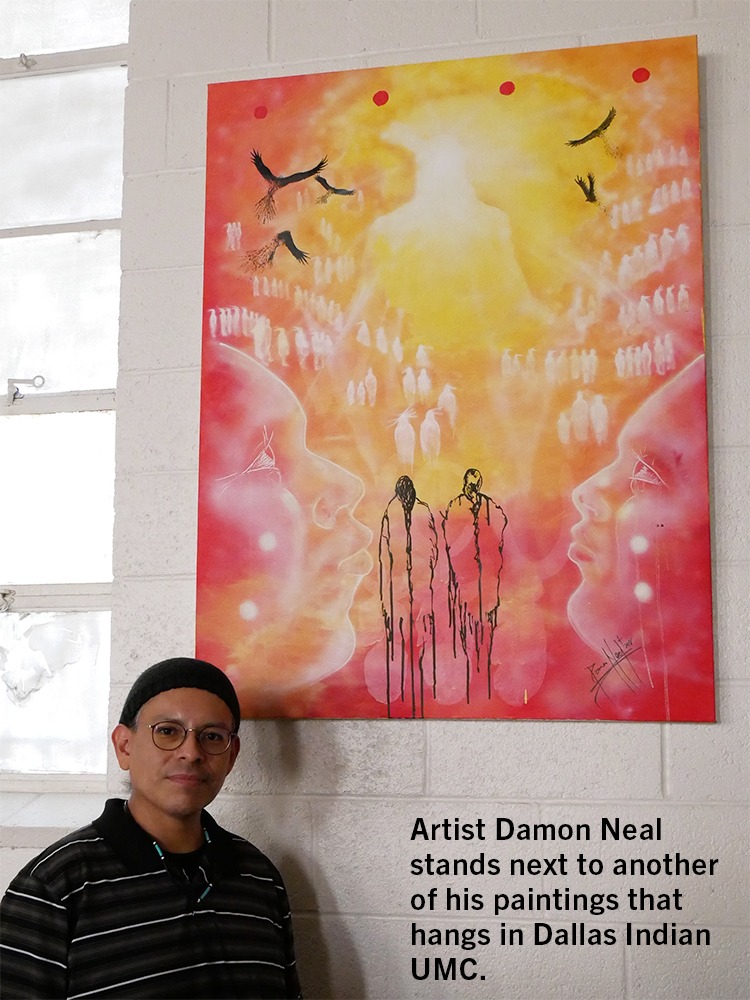 “J.B. knows how to speak to us on our level. He knew, with me, it was art,” said Neal, a member of the Jicarilla Apache Nation. His mother is Apache and his father was of Cherokee, Wichita, Caddo and Delaware descent. “He talked with me during a taco sale about painting different images of what each culture would envision as Christ.”

The pen-and-ink illustrator had not been able to draw anything since his father’s and brother’s deaths, and the Booker T. Washington High School graduate had never worked with oil paints before. But, Neal has found healing through the process of pouring his artistic talent into this project.

The mural takes the space that had been held by a depiction of the Last Supper featuring a pale-faced Jesus. Rev. Jackson spoke about the importance of seeing Christ in different ways.

“A White Christ was just embedded because we’ve seen that icon or imagery of what the dominant culture says Christ should look like,” he said. “I wondered how it would be if the Dallas Indian community would come into this place and see a Red Christ? What would be the reaction to it?”

The plan was to have a Christ wall that would include a wide range of depictions of Christ. Then, the church did an Advent study of All Earth is Waiting: Good News for God’s Creation by Katie Dawson … and the plan changed.

“In reading the book, it became clear to us that all of God’s creation is crying out for redemption,” Rev. Jackson said. He talked further with Neal, and it evolved from there: “Instead of just Christ’s face it became all of creation drawing us to Christ.”

Neal started painting the background for the Christ wall in March.

“It was originally supposed to be simple clouds, nothing more, nothing fancy and should have taken a day,” he said.

As he was painting, different animals and sea creatures kept emerging in the shapes of the clouds.

“I kept covering them up, and they kept showing through,” he said. “And before I knew it all these animals kept popping up. Then I knew I had to let the Holy Spirit guide this. Everything just flowed naturally from color to shape and how it flows.”

The mural has become a centerpiece in worship for the Dallas Indian UMC community, which is comprised of Native Americans from a wide variety of tribes and nations. Each Sunday as the people gather, they spend time sharing what they are seeing emerge from the clouds. This has united the community in prayer as the Holy Spirit guides this communal offering.

Animals that represent each tribe are included in the mural as well as people’s spirit animals and other aspects of creation that draw people to God.

“Every week when we would have church, we would have discussions about the Holy Spirit and how Damon was being led to paint,” Rev. Jackson said. “People would say ‘Oh I see this!’ or ‘I see that!’

“Folks could imagine themselves or envision themselves in that relationship to the creator. That within itself gives explanation to how Native Americans view the creator and the creation. Instead of a linear view that Europeans had, it is a circular view. Everything returns back to the creator and is related to each other. What we do today impacts tomorrow and everyone around us.”

Neal has found that painting the mural has become a form of prayer for him and for the community.

“Everything for us is a circle, it starts and ends somewhere,” he said. “Right now, the circle is still open, there are more prayers and more of the Spirit to put into it. As for when it will be done, I’ll just know when I know.”

The mural, titled “Window to Heaven,” celebrates that the voice of God works in all five senses. The Dallas Indian UMC community continues in weekly conversation about the painting and how they are seeing God.

Rev. Jackson intends for all of the walls and the ceiling and the windows to be filled with not only Damon’s but other Native American artists’ work.

“Every wall will tell a story so the preacher doesn’t have to preach so much,” Rev. Jackson said.

Video: Neal Talking About The Mural