How Not to Say the Wrong Thing 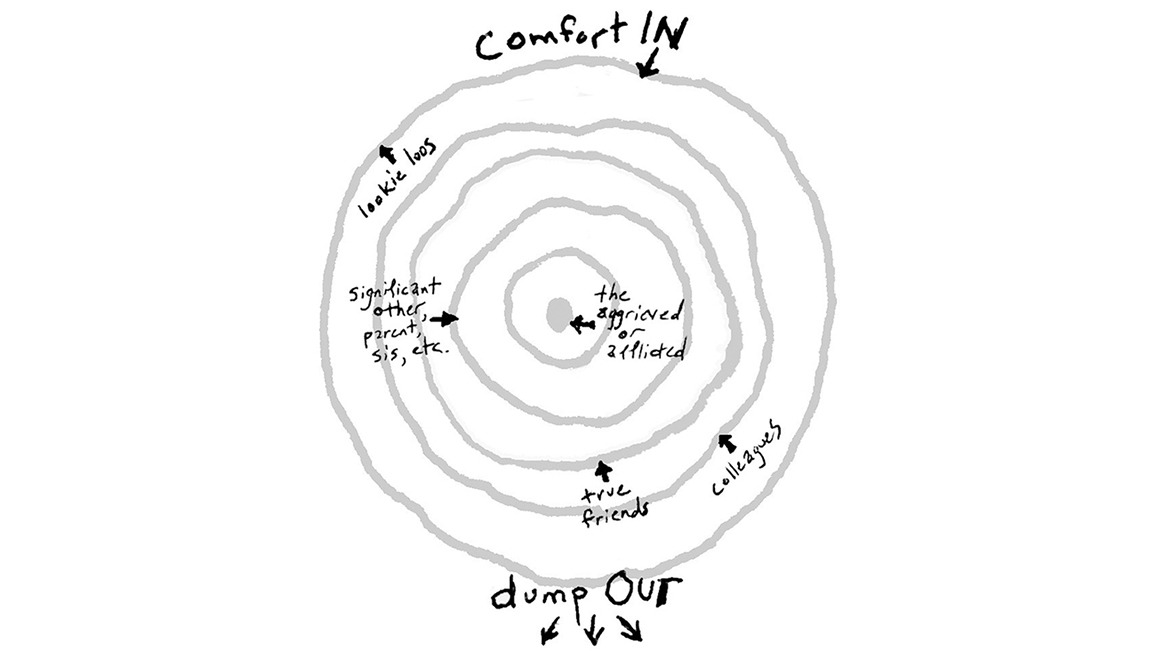 We’ve all been there, stumbling for words at a bedside or funeral. The Ring Theory helps you know what to say

When Susan had breast cancer, we heard a lot of lame remarks, but our favorite came from one of Susan’s colleagues. She wanted, she needed, to visit Susan after the surgery, but Susan didn’t feel like having visitors, and she said so. Her colleague’s response? “This isn’t just about you.”

“It’s not?” Susan wondered. “My breast cancer is not about me? It’s about you?”

The same theme came up again when our friend Katie had a brain aneurysm. She was in intensive care for a long time and finally got out and into a step-down unit. She was no longer covered with tubes and lines and monitors, but she was still in rough shape. A friend came and saw her and then stepped into the hall with Katie’s husband, Pat. “I wasn’t prepared for this,” she told him. “I don’t know if I can handle it.”

This woman loves Katie, and she said what she did because the sight of Katie in this condition moved her so deeply. But it was the wrong thing to say. And it was wrong in the same way Susan’s colleague’s remark was wrong.

Susan has since developed a simple technique to help people avoid this mistake. It works for all kinds of crises: medical, legal, financial, romantic, even existential. She calls it the Ring Theory.

Draw a circle. This is the center ring. In it, put the name of the person at the center of the current trauma. For Katie’s aneurysm, that’s Katie. Now draw a larger circle around the first one. In that ring put the name of the person next closest to the trauma. In the case of Katie’s aneurysm, that was Katie’s husband, Pat. Repeat the process as many times as you need to. In each larger ring put the next closest people. Parents and children before more distant relatives. Intimate friends in smaller rings, less intimate friends in larger ones. When you are done you have a Kvetching Order. One of Susan’s patients found it useful to tape it to her refrigerator.

Here are the rules. The person in the center ring can say anything she wants to anyone, anywhere. She can kvetch and complain and whine and moan and curse the heavens and say, “Life is unfair” and “Why me?” That’s the one payoff for being in the center ring.

Everyone else can say those things too, but only to people in larger rings.

When you are talking to a person in a ring smaller than yours, someone closer to the center of the crisis, the goal is to help. Listening is often more helpful than talking. But if you’re going to open your mouth, ask yourself if what you are about to say is likely to provide comfort and support. If it isn’t, don’t say it. Don’t, for example, give advice. People who are suffering from trauma don’t need advice. They need comfort and support. So say, “I’m sorry” or “This must really be hard for you” or “Can I bring you a pot roast?” Don’t say, “You should hear what happened to me” or “Here’s what I would do if I were you.” And don’t say, “This is really bringing me down.”

If you want to scream or cry or complain, if you want to tell someone how shocked you are or how icky you feel, or whine about how it reminds you of all the terrible things that have happened to you lately, that’s fine. It’s a perfectly normal response. Just do it to someone in a bigger ring.

Comfort IN, dump OUT.

There was nothing wrong with Katie’s friend saying she was not prepared for how horrible Katie looked, or even that she didn’t think she could handle it. The mistake was that she said those things to Pat. She dumped IN.

Complaining to someone in a smaller ring than yours doesn’t do either of you any good. On the other hand, being supportive to her principal caregiver may be the best thing you can do for the patient.

Most of us know this. Almost nobody would complain to the patient about how rotten she looks. Almost no one would say that looking at her makes them think of the fragility of life and their own closeness to death. In other words, we know enough not to dump into the center ring. Ring Theory merely expands that intuition and makes it more concrete: Don’t just avoid dumping into the center ring, avoid dumping into any ring smaller than your own.

Remember, you can say whatever you want if you just wait until you’re talking to someone in a larger ring than yours.

And don’t worry. You’ll get your turn in the center ring. You can count on that.

Susan Silk is a clinical psychologist. Barry Goldman is an arbitrator and mediator and the author of “The Science of Settlement: Ideas for Negotiators.”