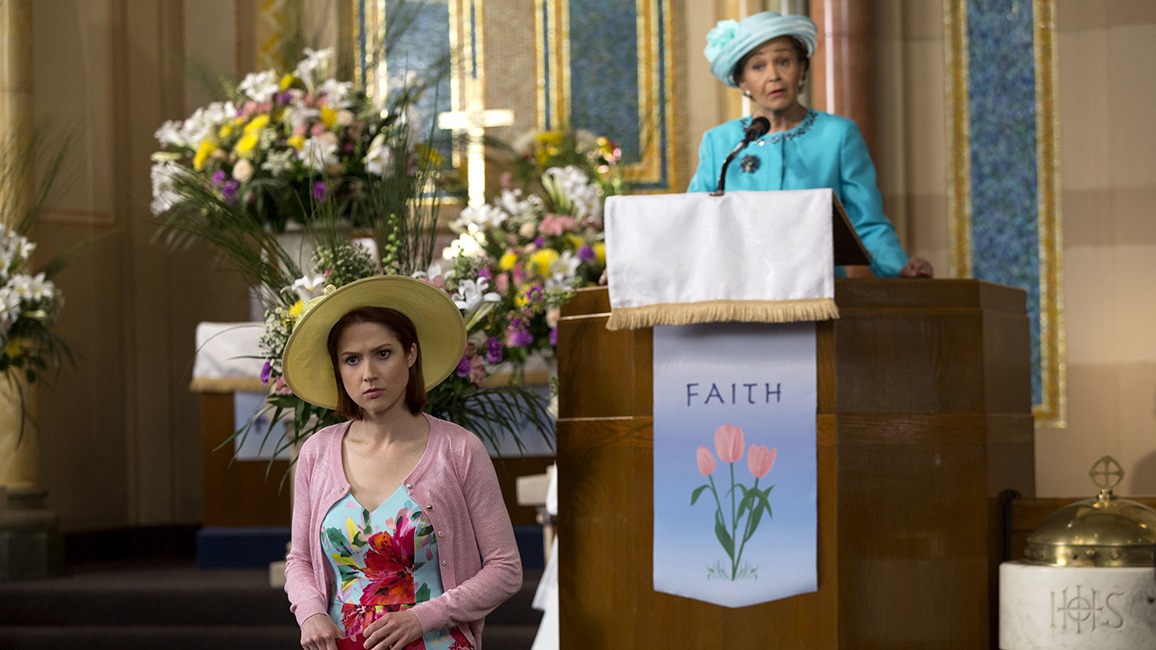 Kimmy Schmidt has reasons to hate the very idea of religion. The premise of the Netflix comedy series The Unbreakable Kimmy Schmidt is that, as a teenager, she was kidnapped by a cult leader and fed ridiculous lies about God and the outside world while trapped inside a bunker for 15 years. The “reverend” who imprisoned her is undoubtedly a villain, even when his insanity is played for comic relief.

So when Kimmy’s new friend Perry tells her that he’s thinking of becoming a reverend, Kimmy throws a trash can at him.

There are other surprisingly deep conversations Kimmy has with Perry, a philosophy student, but that moment in particular leads to one of season three’s most interesting episodes, “Kimmy Goes to Church.”

*Slight spoilers for season three of The Unbreakable Kimmy Schmidt and season two of Master of None below.*

The episode opens with Kimmy telling her friend and roommate Titus, “I’ve been thinking about God lately.” She realizes that she doesn’t actually know anything about “real religion.” Titus, meanwhile, hasn’t been to church since he was 12 years old, after he was kicked out of the choir for, well, being Titus: self-centered and arrogant. By the kind of astonishing coincidence that only happens on TV, it’s Good Friday, so they end up spending quite a bit of Easter weekend in and around church.

There, Kimmy makes two important revelations about the members of the Christian church they visit. They’re both equally important and each necessary for the other: 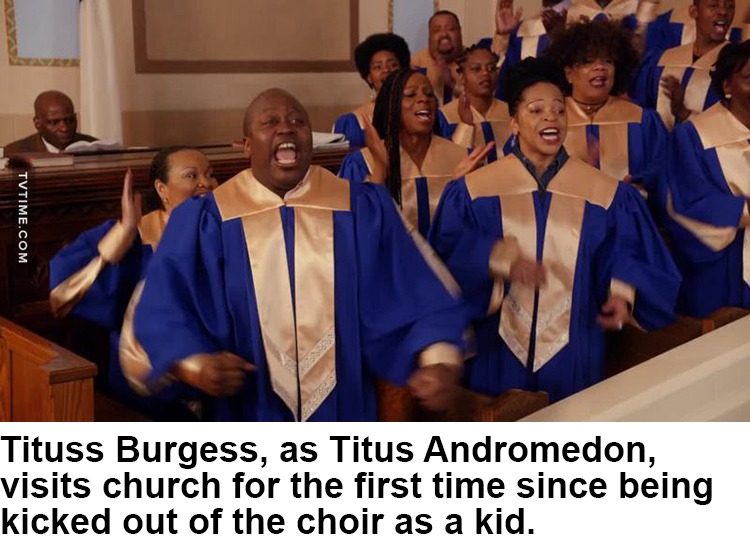 It’s a roller coaster of an awakening for Kimmy, who at first is impressed by the charity opportunities the church provides. She’s emboldened by the fact that the church has a female pastor and excited about how many new people were willing to give her hugs. But when she suspects that a seemingly sweet older woman, Ms. Clara, is not only a controlling gossip but also a thief, her opinion of religion comes crashing down.

It isn’t until near the end, when Ms. Clara is revealed to be innocent (of theft, at least) and everybody in church stands up to reveal their own sinful flaws that Kimmy learns the truth: “Real religion is about knowing we’re not perfect, but trying to be better together.”

Many portrayals of religion in pop culture don’t show both sides of that coin. They either portray religious people as paragons of virtue (most commonly in media targeted at those very Christians) or, perhaps more commonly today, as hypocrites who preach one thing and practice another.

Both of those portrayals are harmful in their own ways. The first sets up disappointment like Kimmy experiences in the episode: As soon as the people you’re told are perfect begin to falter, you lose your faith in more than just those people. The second hurts because it’s not fair to the millions of people who pray to God every day for the strength to be a better person than they were the day before.

The episode may not have ended with anybody getting on their knees and accepting Christ, but it did retool the show’s iconic theme song lyric “Females are strong as hell” to be “Jesus is strong as hell” during a joyous choir performance, which struck me as impressively pro-Christian in a show that could easily have knocked religion down.

Closer to the other end of the spectrum is Master of None, which features a character who respects the beliefs of his parents but has no religious inclination himself.

The show is about Dev, a semi-autobiographical version of series creator and star Aziz Ansari. In its very artsy and thoughtful second season, the show explores a wide variety of topics including romance in the age of dating apps and LGBT acceptance. The episode titled “Religion” deals primarily with the Muslim traditions that Dev grew up with, but in which he doesn’t believe.

Dev, raised in America, is at a friend’s house as a child when the friend’s mom offers him bacon. He tries it, loves it and then is told by his mother: “Bacon is pork. We are Muslim. We are not allowed to eat pork.” 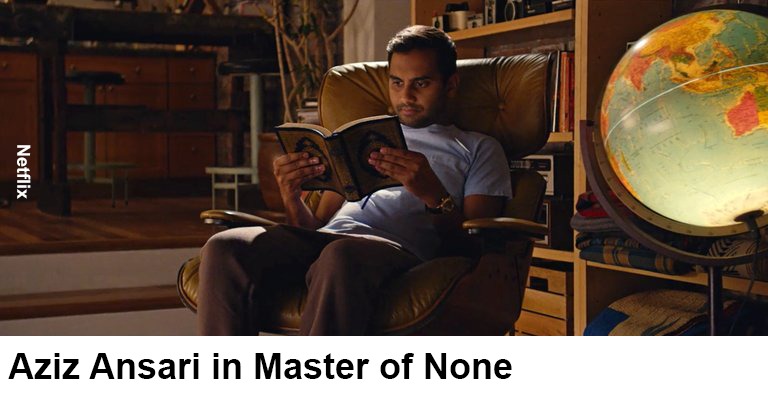 For Dev, that was the beginning of the end of his association with religion. The rest of the episode revolves around Dev’s parents asking him to pretend to be a faithful Muslim for the sake of some visiting family members — a form of deception that Dev struggles with. He wants to respect his family, but he also wants his family to respect his own beliefs (or lack thereof).

The religion episode contains profound and important commentary not just on religion, but specifically on being a Muslim in America, and it’s worth watching no matter your religious background. (It also happens to be very funny.) But it makes an important observation about many American millennials’ relationships to religion, which Ansari summed up well in an interview with NPR.

“I just remember being a kid and even having that thought of, well, it seems like everyone’s just doing whatever their parents’ religion was,” he said. “It never seemed like any parent went and read all the religious books and said — well, I’m not really into Buddhism or Taoism. Christianity’s the one for me. Everyone just did what their parents did. So that immediately made me skeptical of the whole thing, even as a kid. So I never was really into religion as a concept.”

He’s not wrong. For many people, religion boils down to how they were raised. Someone might be a Baptist just because his parents were Baptists and took him to church at least a few times a year, if not weekly. In our culture, we often don’t take the all-important steps of actually diving deep into what we supposedly believe.

I can’t relate to all aspects of Master of None’s religion episode, because for one thing I’m Christian, not Muslim, and for another I actually grew stronger in my faith as I grew older, unlike Dev/Aziz. When I hit my own “bacon incidents,” such as they were, I ran to philosophy and theology with questions that were sometimes very difficult to ask. Many young people in today’s culture, though, aren’t encouraged to ask such questions. They are instead told, “You are a person of this religion because you are part of this family.”

That’s not a problem exclusive to any one faith. Whether you’re Catholic, Muslim, Mormon, Sikh, Hindu, Jewish or anything else, there will probably be people in your life who would rather just tell you “We’re not allowed to eat bacon” and have you leave it at that, no questions asked. Speaking as a Christian, I think it’s led to a weaker Christianity.

Religion is complicated. It always has been, but shows like Master of None and Kimmy Schmidt are allowing us to explore its complexities in fascinating ways — even when disguised as secular comedies. If you’re the kind of person who wants to get a good idea of how young people today see religion, these episodes aren’t a terrible place to start.