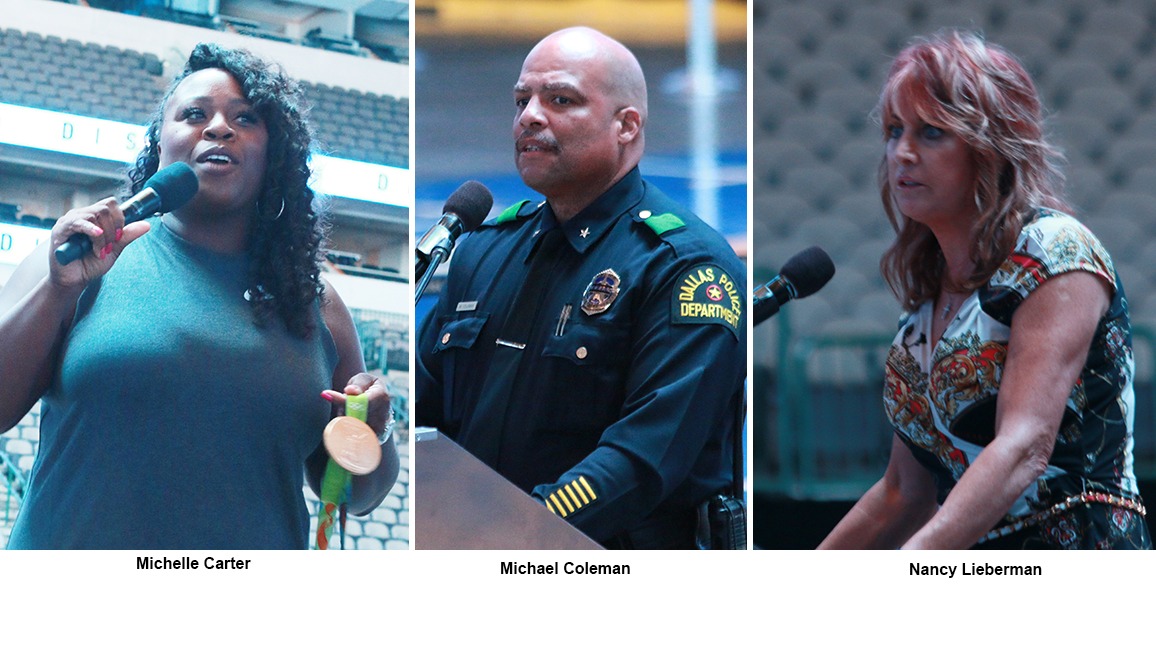 At Together We Heal, powerful names give their takes on tragedy and recovery

It’s been just over a year since the ambush that killed five police officers, leaving Dallas reeling.

The shootings on July 7, 2016, occurred at the end of a peaceful Black Lives Matter rally, a horrifying end to an event in which marchers and police had been congenial. Another eleven people were injured, nine of them police and two civilians.

In January 2017, Richie Butler, senior pastor of St. Paul UMC in Dallas’ Arts District, unveiled the Year of Unity, with events aimed at racial healing planned through the year. They’ve included Together We Pray, Together We Dine and, on Saturday, July 15, 2017, Together We Heal, which focused on youth. 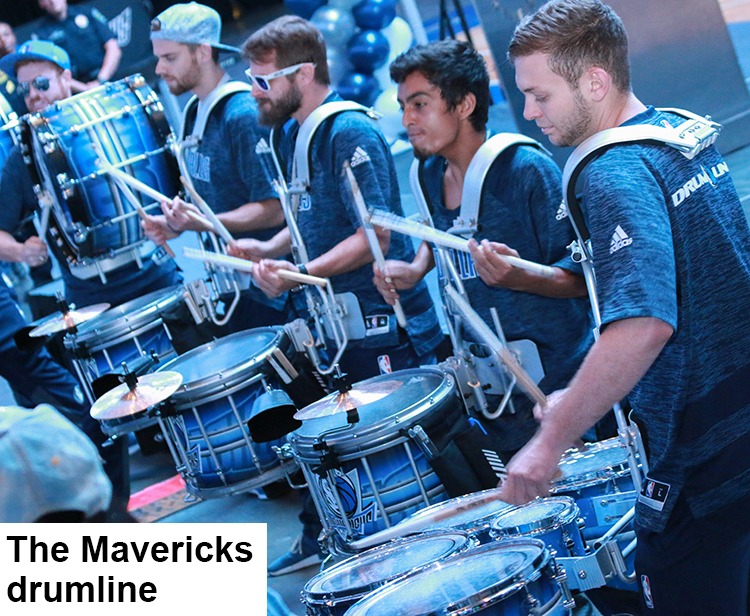 “Year of Unity is more than a year,” Rev. Butler said. “We are building a movement where we challenge people to listen, learn and engage. As we build relationships, we will move our community from the Year of Unity to the City of Unity.”

Together We Heal, at American Airlines Center, brought together people of all ages and races. Speakers included elected officials, Olympians and police. The Dallas Mavericks cheerleaders, Mavs ManiAACs and the basketball drumline performed, and the Rock-Teen step team wowed the crowd.

So how has Dallas progressed in the last year, and what are the next steps for residents? Here are the takes of the speakers in remarks before and during Together We Heal. Comments have been edited for brevity and clarity.

Richie Butler, Year of Unity founder: First of all, there had been efforts to improve relations between police and community in advance of July 7, which is reflective of how our city came together in response. Since July 7, there is a real sense of hope and engagement from all segments of the community. People are talking. We are taking the moment of unity that July 7 fostered, and we are creating a movement. Year of Unity activities and programs focus on raising the consciousness that what unites us is greater than what divides us. 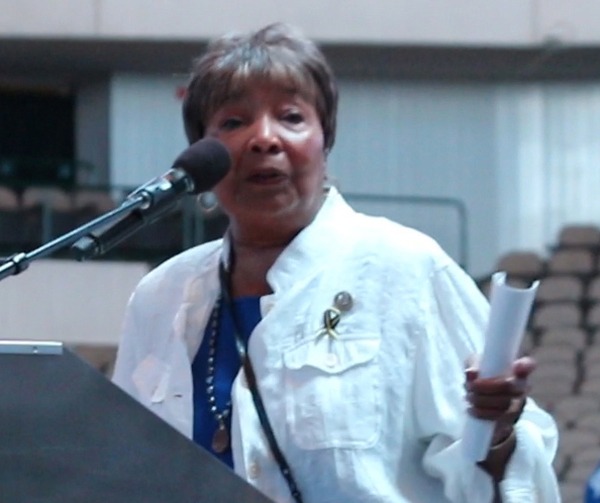 U.S. Rep. Eddie Bernice Johnson: Our city has grown because we have become so much more diverse. When I look out on this crowd I see red hair, blue hair, white hair, black hair — you look like America. … Understand that our law enforcement, yes, have a duty to serve people everyday. But they’re people who live with us, they go to church with us, and they protect us. And we have a responsibility to respect them. Never forget that we’re all in this together.

Faith Johnson, Dallas County district attorney: Communication is the key, and not only communication but sensitivity to one another. Everybody has a bias, a prejudice, but do we have enough mercy and grace within the confines of the law to work out our differences? We need to find that point where we get along and acknowledge our differences. I’ve made the step to bring my office to the people of the community with satellite offices, serving them right in their neighborhood. It’s an olive branch, and I’ve made the step.
On police: A year ago, we had a tragedy here. [The fallen officers] gave up their lives so we could be protected. Every morning I pray for the blue. I pray for their going out and coming in, I pray for their lying down and getting up. I want God to plant guardian angels around them so they can be protected, because when they’re protected, we’re protected.

Kevin Felder, Dallas City Councilman and St. Luke “Community” UMC member: Events like this definitely have a positive effect, but we’re not there yet. I believe police officers need more training on culture in the community and on de-escalation. Ninety-five percent of our officers are good police, but it’s the other 5 percent that give the 95 percent a bad name. They need to be encouraged to self-report on the rogue cops. [As things stand] they don’t want to violate that unwritten code. 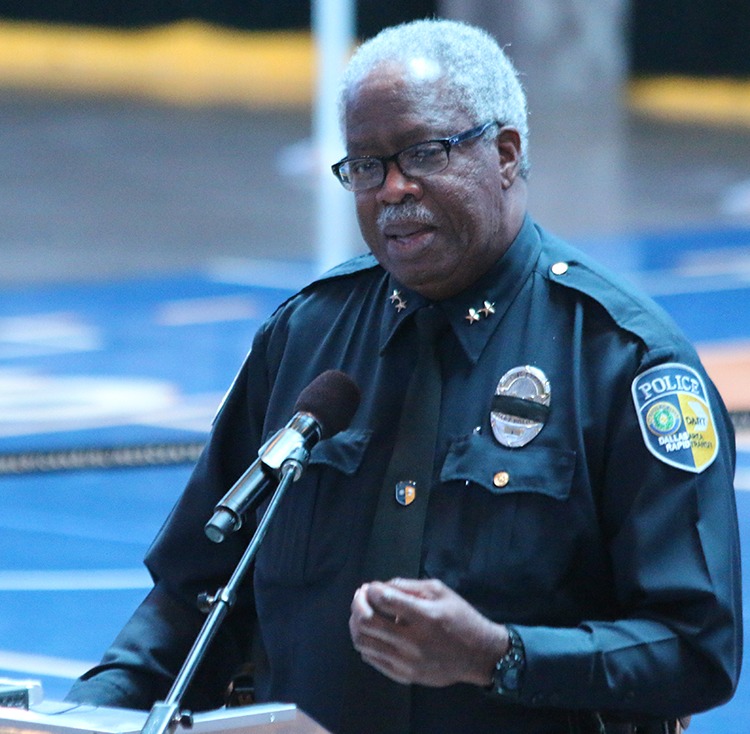 J.D. Spiller, DART police chief: The five officers who died did heroic things. People ran to police when the shooting started, and the officers got between them [and the gunfire]. The Dallas Police Department, the DART police department, we grieved, we cried, but never once has the professionalism been down; we kept our heads high. Let’s not wait for Pastor Butler to have to bring us together whether we are wearing blue, wearing T-shirts or wearing Boy Scout uniforms. I tell my police officers to talk to the public, get out of the car, but I also encourage the public to talk to them.

Dr. Brian Williams, chief trauma surgeon, Parkland Memorial Hospital, on duty July 7, 2016: I was asked to speak at a state chiefs of police conference in a state that is known as one of the whitest in the country. When I got there, I’m the only black face in the room. I took a deep breath and I laid it all out in about a half-hour, 40 minutes of dialogue with men and women with decades of experience on the force. We didn’t agree on everything and at times it got testy, but we were respectful. To this day I have relations with these people.
To the audience: Find one person here that you didn’t come here with and make a connection, get their number, their email, and commit to continue the dialogue.

Nancy Lieberman, basketball star and Olympian: Last year we were all hurting because of the loss of life. I have been white for 59 years, but our hearts bleed the same. I’m looking for teammates in acceptance and inclusion.

To children: If you will believe in yourself, if you will trust yourself, if you will be willing to work hard for your opportunities, you can run for government service, be an athlete, a doctor, a lawyer, president of the United States. I was very blessed to have Muhammad Ali as my lifelong friend, and he told me that I could be anything I wanted to be if I believed in me. He taught me that.
To police: I get people clapping for me because I played basketball or played in the Olympics or coached in the NBA, but you guys are the real game-changers.

Michael Coleman, Dallas deputy police chief: The 1 percent of us who steal, the 1 percent who wear the badge and tarnish it, the 1 percent who have inappropriate relationships with kids seem to be getting all the attention. Let’s talk instead about the 99 percent who are doing it right. Ms. Brown, my teacher in eighth grade, used to get on me for not doing my homework and for wearing my pick in the back of my head — it was the ’70s. But what she told me started to sink in. She’s a hero, and we need to continue to recognize these heroes. We need to keep the momentum going outside of this tragedy and show the 1 percenters we’re all united.

Michelle Carter, Olympic gold medalist in shot put: The big thing is you do not give up on yourself. You have yourself, your family, your community, you have everybody there to help you achieve what you want to achieve. Integrity is who are you when nobody’s looking. When your parents are not watching, are you doing things you should not do or are you acting the same way in front of your parents and with your friends? Be the same person no matter who’s around. … And hey, we’re Dallas strong!

Rock-T, head of the mentoring group Rock-Teen: When I was a boy and out playing with my friends, by the time I made it back home I had about 20-25 parents pulling me aside, “Rock, where you going? Your mother know where you’re at?” Today, the parents don’t even know half the kids in the neighborhood. If you see a child or a teenager in your neighborhood, ask their name, who their parents are, even where they live. Let’s go back to that old school way of unity in the neighborhood. If we do that, when negative stuff starts impacting our community, we’re going to stop that real quick. And police are part of our community.

Theresa Daniel, Dallas County commissioner: In the last year there has been an increase in talking and sharing and finding these commonalities in the community. We’re already working very closely with the city. Some of what I saw last year was people coming together, showing that we can join our skills and talents.