From Online To On Stage: Dumpling Warriors Unite For Support, Advocacy 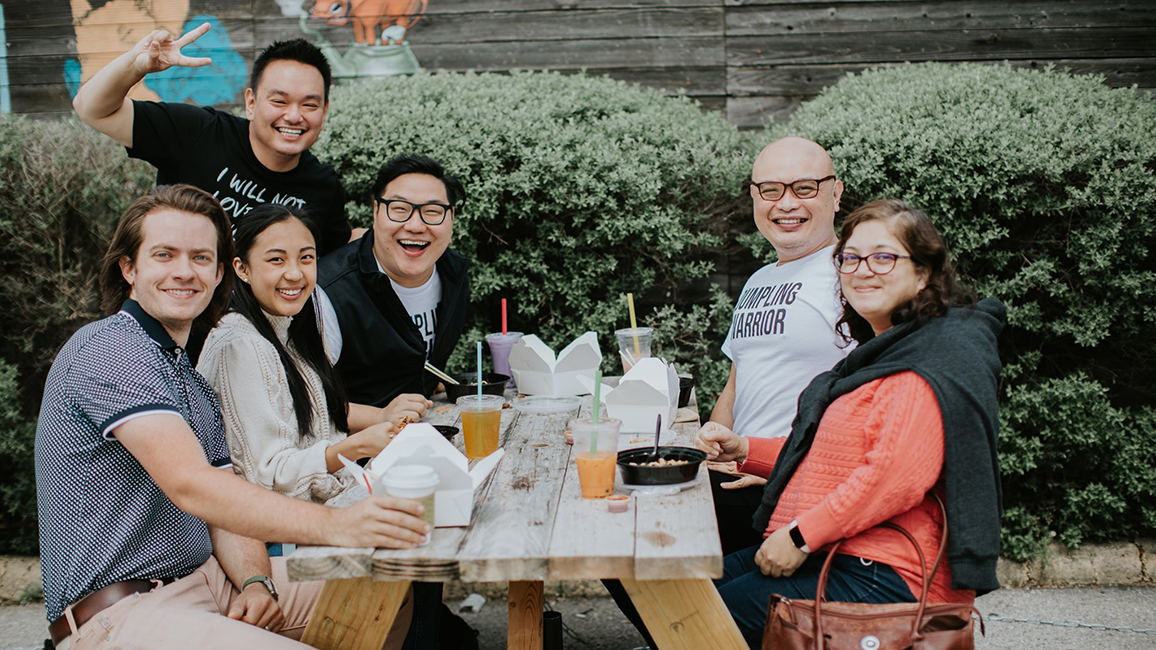 Dumpling Warriors began one year ago when Rev. Mike Baughman, gathered together Asian American and Pacific Islander (AAPI) residents in the Dallas area who all had connections to Union Coffee. Their initial purpose was to apply for a grant from North Texas Cares to address AAPI discrimination. They worked up a grant proposal and, along the way, formed a strong community of mutual support. 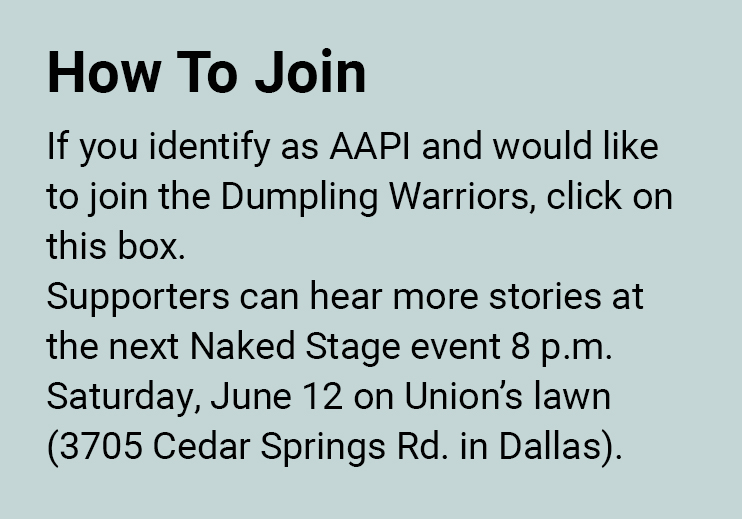 While they did not receive the funding, something powerful grew out of the experience.

The Dumpling Warriors' mission is “an inclusive and affirming place for people of Asian descent to build community, create social change, celebrate heritage, amplify stories and eat all the dumplings.”

As a transplant from California, founding member Angela Uno said the number one thing she felt when she moved to Dallas was isolation.

“If you move to Dallas as a young person of Asian descent it’s hard to find a place to connect,” Uno said, “and we’ve been able to make a space for that.”

Uno, Baughman and other organizers recognized the need to support young Asian Americans in finding their voice and identifying with their heritage.

“There are few spaces for intentional AAPI community in Dallas and even fewer spaces for AAPI voices to be amplified,” Baughman said, so it was important for Union to place the AAPI experience center stage at their storytelling series this summer.

The Naked Stage hosted the first of several storytelling events focused on AAPI experiences on May 8. Seven speakers of AAPI descent told their stories with pride, vulnerability and humor as attendees relaxed on blankets and picnic tables spread across the Union lawn and sampled dumplings from local eatery Hello Dumpling.

“I am often surrounded by those who are not from my culture and identity and this opportunity to hear AAPI stories was incredibly affirming,” said Rev. Kim, who is of Korean descent. “It is powerful to be validated in one’s identity and feelings by those who have gone through similar experiences.”

One goal of Dumpling Warriors’ Naked Stage series is to amplify voices that are often silenced and to encourage visibility. Another hope is that non-AAPI audience members will gain a deeper understanding of Asian Americans so that they can be better friends, co-workers, family members and collaborators.

As anti-Asian discrimination and racially motivated violence increases, this is a critical time to ask what we in the North Texas Conference can learn from 56 Dumpling Warriors and their work. Uno said churches need to listen and open up space as initial steps to work toward racial healing and transformation. She shared that although she’s been a member of the community at Union for over six years, some of her closest friends there just discovered she speaks Japanese, which she sees as a core piece of her identity.

“I wonder if that happens in churches all around,” Uno said. “Are we listening to each other, finding things out about each other? It’s about listening, but it’s also about asking the right questions.”

“We have many Korean United Methodist Churches in our Conference, along with many other faithful congregations with their diverse backgrounds,” Rev. Kim said. “I hope to see our Conference continue to actively engage in the work of racial justice and healing, and to continue to look for ways to equip our clergy and laity to do such important work as this.”