French’s Spirit Prevails in Life Story Worthy of a Telenovela

The Rev. Amy Spaur, pastor of Christ’s Foundry, translated for the interview.

Everywhere Lucía French goes, people seem to flock. But it’s not her, the associate pastor of Christ’s Foundry said — it’s God working through her. 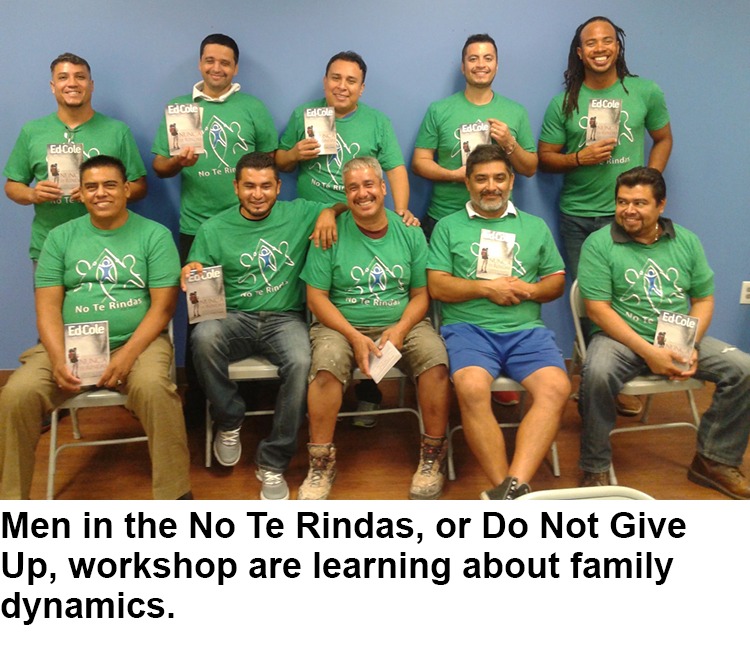 Hers is a story of a strong spirit emerging from difficult circumstances to assure others that they, too, can overcome struggles. And hold on — this is better than any telenovela.

Raised a Catholic in Quito, Ecuador, Rev. French came to know the Lord at about 14 through her best friend, Cathy, who invited her to a Baptist church. At 16, she was baptized in that church — against the will of her family.

“I always felt something special when I was in church and wanted to go into the seminary,” she said. “But my Baptist pastor told me it would be better to choose a different career because I would never be a pastor unless I married a pastor.”

Instead, Rev. French and her best friend studied medicine, but she dropped out in the fourth year for lack of money. Cathy continued on, eventually obtaining her medical degree.

Her husband beat her, even breaking her bones and leaving her hospitalized multiple times.

“I accepted being a victim of domestic violence. There was a lot of forms of violence in that marriage, and it ended with physical violence. But I didn’t understand it at the time,” she said. “I thought at times that I deserved it. I didn’t know how to get out of these problems, so I came to accept that this is just what life is.”

Her husband stopped hitting her two years before their son was born, but she later found out that he was having an affair with his secretary. Two months after Danny was born, Rev. French, then 28, gathered the courage to leave and then found herself financially victimized.

“He falsified my signature” so that everything they owned was in his name — except the house, which was too difficult to transfer under Ecuadorean law.

By then, she “had come back to the church and was really having intimate encounters with Christ. But I was very wounded, and I didn’t think I could be useful or serve in the Christian church because of my woundedness.”

Her friend intervened again, serving as “a bridge between God and myself.” And another twist: The young doctor was on her deathbed with colon cancer.

“Eight days before she died,” Rev. French said, “she told me that God was calling me to the ministry. But I laughed at her and said, ‘I don’t have anything to offer God.’ ”

“‘Do you love Christ?” Cathy asked.

“She closed her eyes and asked me again, ‘Do you love Christ?’ because I was answering back with a lot of excuses.

“She put her hands on me and everything that God had given her, she was now passing on to me. I felt for the first time the Holy Spirit.” 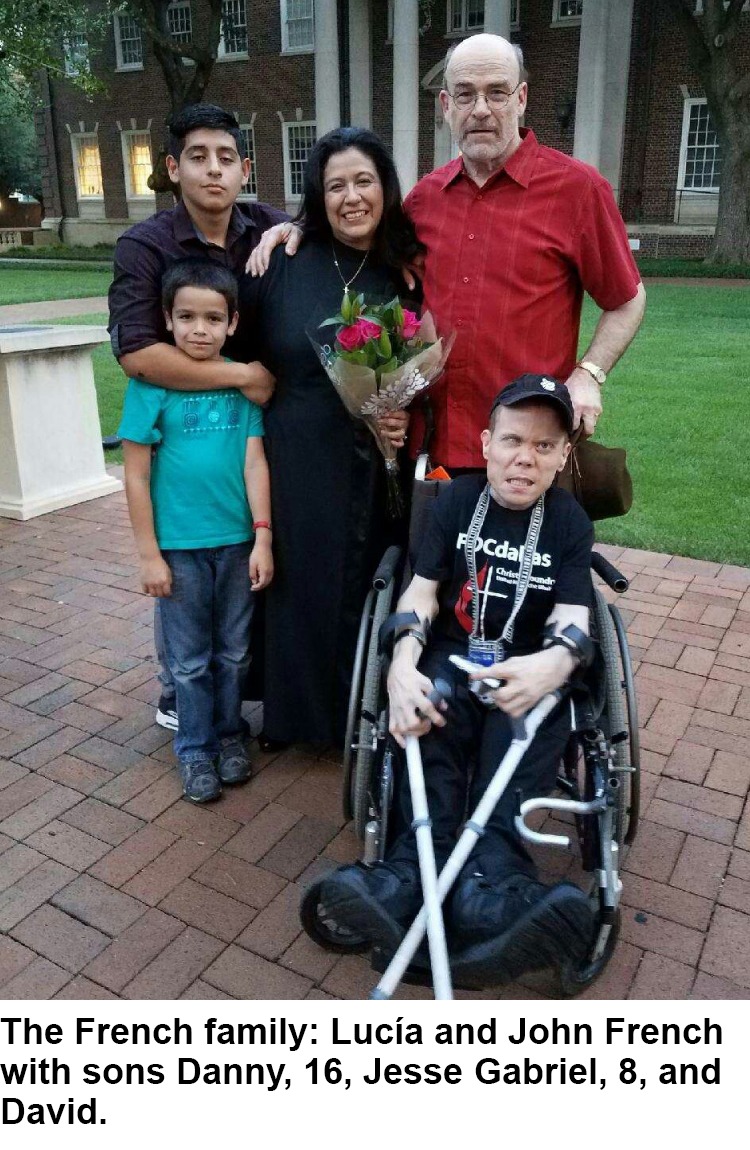 After her friend died, Rev. French took over the youth ministry of their nondenominational church.

“I didn’t know anything about youth ministry,” she said. “What little I had read in the Bible, sometimes I didn’t even understand.”

There was another complication: The youth group met on Saturdays, and Saturdays were the busiest days for her thriving retail business, which sold clothes and office supplies. Business, in fact, was so good that she was ready to open a second location.

But her passion for God was stronger.

“God has always supplied my needs,” Rev. French said. “And, actually, I felt the more I dedicated my life to serving God, even more blessings I received in all areas of my life.”

She built that youth group from seven members to 45 in a year, and 20 of them were baptized.

Life was good for her and Danny, now about 4, and it was about to get better.

A friend on her ministry team told her about a man from the United States who had adopted a disabled boy and was coming to visit.

The next week, “a very, very handsome American man” — Rev. French insisted that she be quoted on the “very handsome” part — “came through the door of that small church with the son.” Her heart, she said, was “beating 100 miles per hour.”

The pastor’s wife then made a memorable introduction:

“Now, when will you get married?”

They were both embarrassed, but two weeks later, John French asked Lucía to be his wife.

Arriving in the U.S.

The couple arrived in Dallas on Feb. 14, 2006, and married at noon. Rev. Owen Ross, then pastor of Christ’s Foundry, married them — he was the only bilingual clergyman they could find.

Although her husband was a member of Lovers Lane, Rev. French was “desperate to find a Spanish-speaking church.” She thought all U.S. churches would be the size of Lovers Lane, so when she went to Christ’s Foundry, she was surprised to find it meeting in “a storage room of an apartment complex.”

But she thought she could help out, so “I went to Pastor Owen and told him I have experience in youth ministry — I hadn’t even finished saying that” when he seized upon her offer.

“I thought I would find a group of youth similar to Ecuador,” she said. “I felt confident and strong and had a lot of ideas, but it was very difficult.”

For one thing, “they only ate pizza!” she said. More serious, they were confronted with gangs, drugs, teen pregnancy, fractured families and incest. Parents often worked more than one low-paying job to make ends meet, meaning they couldn’t look after their children.

“They don’t even sleep, they’re working all the time,” she said.

And she had to adapt to Mexican and Central American cultures.

Again, she started with a handful of youth, 8 or 10, and built the group into 40 to 50 in four years because she realized she had to help the youth and their parents deal with the struggles they faced.

“The problems were not centered on the youth, but more on a family level,” she said. She turned her focus to parents with workshops from the family perspective. When she developed “How to Open the Heart of Your Children,” parents responded.

God is calling you to be an ordained pastor, Rev. Ross told her. Like her late best friend, “Pastor Owen was the other person God used to shine a light on that calling.” She finished a five-year course of study and became a licensed local pastor.

Christ’s Foundry moved into its own building, and Rev. French became associate pastor. The Rev. Amy Spaur, who Rev. French counts as a mentor, is now pastor.

Rev. French is continuing to expand her outreach to families, trying now to draw in men through No Te Rindas, or “Do Not Give Up,” a fall workshop that is a companion to the one she conducts for women. In the spring, she plans to add a couples ministry.

“I believe in women. I also believe in men. So that’s why this new ministry addresses both men and women,” she said. “Many churches want to restore the youth or the children or women or men, but I believe if God would restore the couple, [then] churches would build a new generation.”

Her own family is “my motor,” and they know “this is a very demanding calling. They see the bigger picture,” she said.

Danny is now 16. And there’s been an addition to the family since the Frenches wed. Their son, Jesse Gabriel, is 8.

After living through domestic violence, Christ’s Foundry Associate Pastor Lucía French has made ending abuse a focus of her ministry. She found a kindred soul in Pastor Sarah Reyes, her former classmate at Perkins School of Theology who had also left a violent marriage.

Rev. Reyes developed the Virtuous Hispanic Woman Institute, “a ministry that really went to the heart of women who had been abused or mistreated, that worked not from the angle of abuse but self-esteem.” The six-month course, which Rev. Reyes introduced in Houston, graduated its first class in North Texas in July. 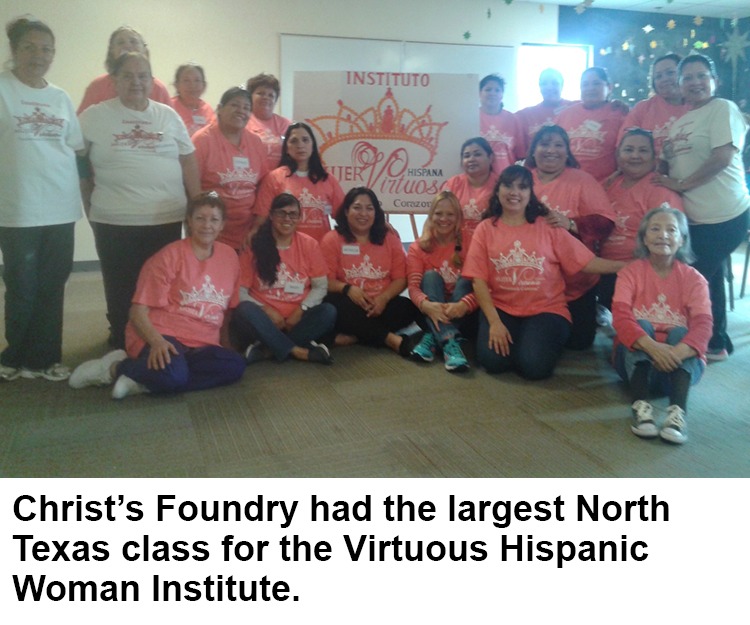 “If I had understood who I was and my value as a woman when I was 20 years old, I would not have allowed that kind of violence against me in the marriage,” Rev. French said. “But those are topics that are not discussed, and we don’t even know how to preach about that.”

The church, she said, is “behind on these issues.”

And she understands why: “I didn’t want anyone feeling sorry for me or to point me out during that time in my marriage, and I had distanced myself from the church. And my question always was, ‘Where was God?’ when I was being abused.

“I remember one time Pastor Owen [Ross] preached on domestic violence. It was one of the hardest messages for the church to hear,” she said. The congregation was “very quiet while he was preaching, and there was a feeling of ‘I don’t want to hear about this.’ ”

But the Virtuous Hispanic Woman Institute “opens up those issues in a wonderful way.” When she saw the topics that the course covered, she was sold.

“That’s when I organized a team to knock on 200 doors. I always thought if just one woman could see herself as God sees her, then her life and her story could be changed,” Rev. French said.

Of the North Texas churches that participated in the Virtuous Hispanic Woman Institute, Christ’s Foundry had the largest group: 58 graduated, and about 70 attended each week.

“I don’t think I would have been able to help as many women if I myself had not experienced what it was like to be in an abusive situation — much less when you are in a different country without your family.”

Christ’s Foundry’s new initiative, No Te Rindas, or “Do Not Give Up,” builds on the philosophy of the Virtuous Hispanic Woman Institute.

“The Virtuous Hispanic Woman Institute planted the seed, but the workshop Don’t Give Up is strengthening that seed and watering it,” Rev. French said.