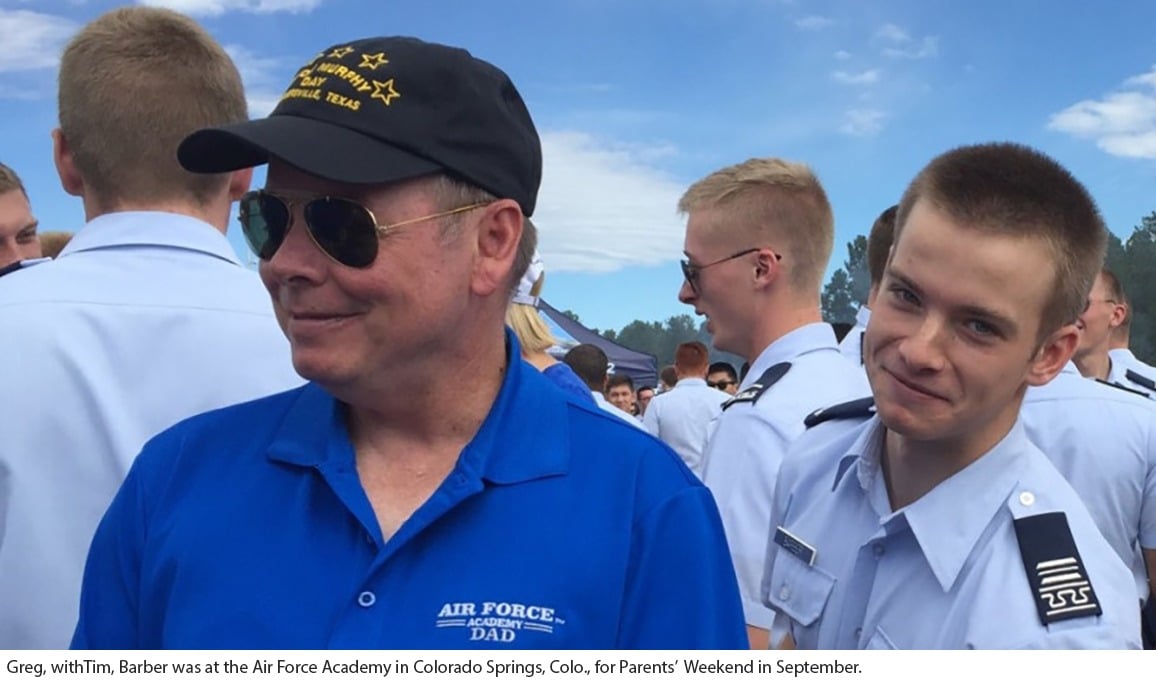 You could rely on Greg Barber every Sunday, and he and son Tim were integral in the church Scouts

On New Year’s Eve, Greg and Tim Barber, members of First UMC Farmersville, took off in a small plane from Aero Country Airport in unincorporated Collin County. They did not live to see 2017: Their plane collided with another, and the Barbers and the pilot of the other plane, Robert Navar, were killed.

At First Farmersville, the tragedy “has left all of us saddened beyond belief,” said Pastor Tom Waitschies.

Greg “Spanky” Barber, 55, a retired lieutenant colonel in the Air Force, was well-known as a pilot. He flew many different aircraft and was one of the select few who piloted the U-2 reconnaissance plane, Rev. Waitschies said. Friends told The Dallas Morning News that he was the last pilot selected to fly the SR-71 Blackbird, one of the world’s fastest manned aircraft and also designed for reconnaissance, before the program was canceled in the 1990s.

But the people at Farmersville UMC knew him as the greeter who was there every Sunday as people arrived for worship. “He took on the job of closing and securing the sanctuary building each Sunday and even helped to set up the large Christmas tree for our Advent/Christmas celebrations,” Rev. Waitschies said. Greg Barber was also a Scoutmaster for the church’s Troop 310, where his son Tim rose through the ranks to achieve Eagle Scout.

“I knew that Tim was a special young man, with a very bright future ahead,” Rev. Waitschies said of the 18-year-old. “You could see it in the way he applied himself in all the activities he was a part of.”

So it was no surprise to the pastor that Tim was appointed to the Air Force Academy, following the footsteps of brother Ben, who graduated from there. Tim was home on Christmas break from the academy.

“He had the strength of character and exhibited a love of God, family and country,” Rev. Waitschies said.

The Farmersville congregation has “surrounded the Barber family with much love. Their pain and loss is our pain and loss. We find in times like these, our faith family is truly family,” he said.

Because of the large number of mourners expected for the funeral that was scheduled for January 9, 2017, the Rev. Matt Gaston of First UMC Plano “graciously offered their sanctuary, facilities and loving congregants to help us during our time of grief,” Rev. Waitschies said. The father and son will be interred at the Air Force Academy in Colorado Springs, Colorado.

“I have been hearing from clergy around the conference as they lift our church in their prayers,” Rev. Waitsches said. “What a blessing it is to have such a connection! Please continue to pray for the Barber family and the FUMC family. Our hearts are heavy, and yet God’s grace and comfort abound.”

Greg and Tim are also survived by wife and mother, Mandy.

The funeral program described the Barber family as “an exceptional family who always puts everyone else before themselves, representing the true meaning of family, friendship, loyalty, compassion, community, teamwork and patriotism.”

“We will continue to honor the lives of Spanky and Tim, knowing that they are now flying high with the angels.”