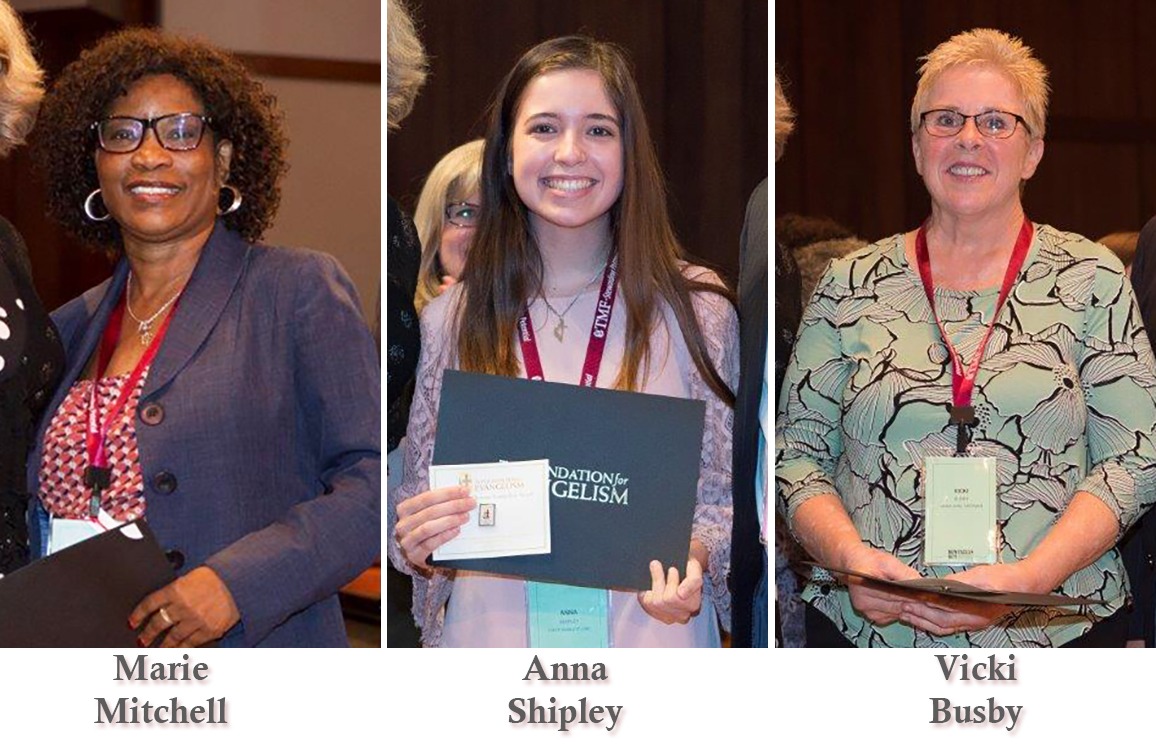 As one of this year’s Harry Denman Evangelism Award winners retires as a senior pastor, another plans a career in the ministry. And the third is forging ahead with her commitment to racial equality and social justice.

The Rev. Marie Mitchell, who is leaving The Woods UMC in Grand Prairie, is the clergy honoree in the North Texas Conference. During her four years there, The Woods had 84 professions of faith and the congregation grew more diverse as she reached out to the community.

Ministry is Rev. Mitchell’s third career after being a newspaper reporter in San Angelo and working in a corporate position for AT&T.

She was the middle child of five kids in a Wichita Falls family that struggled to put food on the table. They ate “a lot of beans, cornbread and rice,” she said. But that strengthened her heart for the poor. Just in time for Thanksgiving last year, The Woods installed its Blessing Box, a free-standing kitchen cupboard in a remote part of the parking lot where those in need can discreetly get food and hygiene items. Rev. Mitchell and office manager Melody Marquez took the idea from concept to reality.

“Soon I will close the door of serving in the church as a full-time elder, but I know that God is not finished with me yet,” she wrote in her final blog item as pastor. “My call continues, and I cannot help but be a servant. I ask for your continued prayers for me as I open the door to the future.”

Anna Shipley, 18, the youth laity Denman honoree, may be stepping through the door of ministry in a few years. She said she first felt the call in seventh grade as she gave her testimony at the Bridgeport youth camp.

“I see a lot of power in child ministry and youth ministry in creating safe spaces to express opinions,” she said.

The Rowlett High School honors graduate plans to major in public relations at The University of Texas at Austin before attending seminary.

Her United Methodist resume is already long, including serving on the North Texas Conference Board of Laity and the Bridgeport Camp board. She recently served as the Faith Formations intern in the conference’s Center for Leadership Development, a position allowing her to “see behind the scenes how to do ministry.”

She was “completely shocked and really excited to tell my parents” when she found out about the Denman award. Todd and Brenda Shipley raised her and her sister, Christina, in First UMC Rowlett.

Vicki Busby, a member of Grace UMC Sherman, prefers “to stay in the background,” but her work for racial equality stood out. That’s part of why she was named the laity recipient of the Denman Award.

Busby said she became passionate about fighting racism after “seeing things that friends of mine who are African-American went through and how they are treated sometimes.”

She and her husband went through training at the Crossroads Antiracism Organizing and Training program in Chicago and have spread their knowledge through workshops. She has conducted racial justice sessions with the United Methodist Women.

She has also led mission trips to Guatemala, Haiti and Africa, and is hoping to arrange a trip to Puerto Rico, which is still recovering from hurricanes Irma and Maria.

The mission trips are an opportunity to “show Christ’s love,” she said.

The Harry Denman Evangelism Award program honors United Methodists in each annual conference who demonstrate exceptional ministry of evangelism, bringing people into a life-transforming relationship with Jesus Christ. The award is named for Dr. Harry Denman, general secretary of the board of evangelism of the Methodist Church from 1939 to 1964.