Council of Bishops in Dallas: ‘Entire Church is Rightly Watching’ 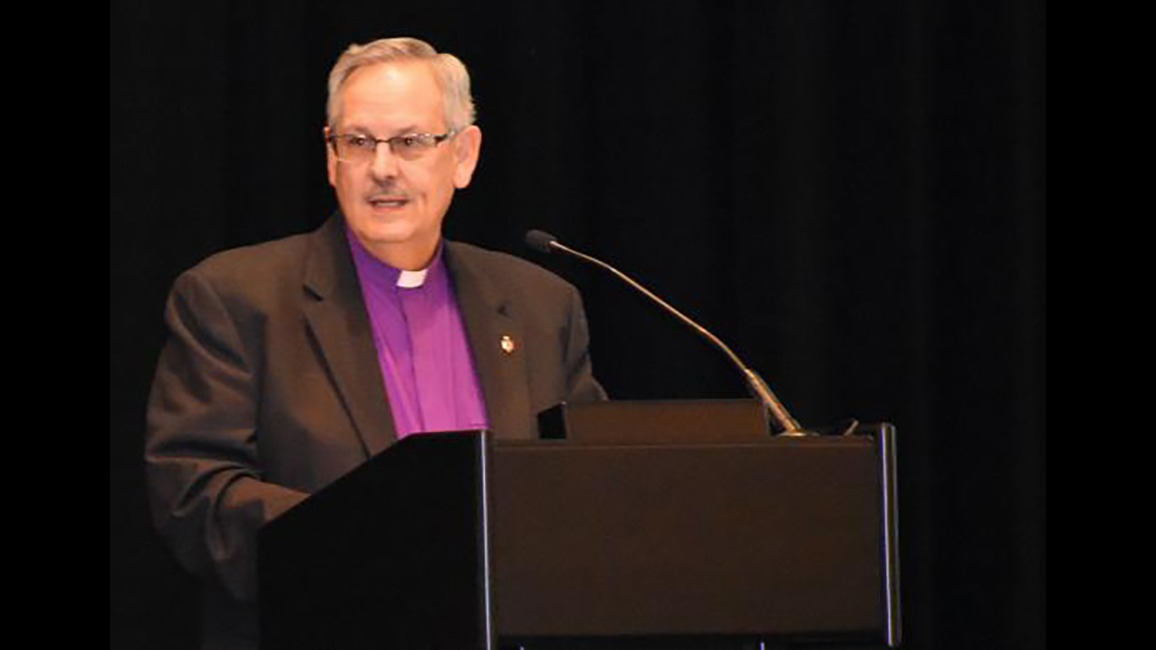 Bishop Ough, the president, opens the meeting outlining the high stakes for the denomination

Council of Bishops President Bruce Ough, addressing his episcopal colleagues in a May 1, 2017, presidential address, spoke candidly of what would be lost if The United Methodist Church breaks up over homosexuality.

“Let’s be clear, if we divide, nearly all our essential unifying institutional activities would be lost or severely diminished,” he said.

“I don’t even know how to begin to assess this cost!” Ough said.

In a speech that combined gospel fervor with analysis of the church’s situation, Ough urged bishops to support the Commission on a Way Forward and redouble their own efforts toward unity, evangelism and social outreach.

“The entire church is rightly watching how we will lead in this moment and as we go forward,” Ough said.

As the meeting was getting underway, the Judicial Council ruled that consecrating a gay bishop violates church law. Although the petition and the ruling did not specifically name Bishop Karen Oliveto, she is the only openly gay bishop in The United Methodist Church.

“There is no escaping or minimizing the reality that this council gathers in the wake of the Judicial Council’s very recent decision regarding the election of Karen Oliveto as a bishop of the church,” Ough said in his address.

“Many of the reactions and responses have been swift, predictable and reflective of the deep division in our connection over the matter of homosexuality, the interpretation of Scripture and conceptions of holiness,” Ough said.

Oliveto, who remains in good standing as a bishop, was present for the presidential address. She also was among the bishops serving communion at the worship service preceding it.

In his address, Ough used the Easter story, particularly the rolling away of the stone at Jesus’ tomb, as a focus point as he warned bishops and challenged them.

“My heart breaks, as a bishop of the whole church, and particularly in this role as president of the council, when I see our stone-rolling mission at risk,” Ough said.

For the Commission on a Way Forward, which is reviewing church law regarding sexuality and searching for ways for the denomination to stay together, Ough had strong praise.

He also drew specifically on the writings of Florida Conference Bishop Ken Carter, one of the moderators of the commission, in recognizing parallels between polarization in the United States and in The United Methodist Church.

Ough noted that significant mission work by the denomination goes forward, through the Four Areas of Focus, and he called on the bishops to redouble their leadership of such efforts.

The address turned personal as Ough offered himself as an example of a leader not doing enough.

“Jesus’ judgment falls hard on me,” he said. “I have seen many hungry people, but felt no pain in my stomach. I have seen the sick and homeless on the streets of Port-au-Prince, but I slept in a comfortable bed.”

Even as he urged efforts to hold the denomination together, Ough said the “final exam” was about serving the broader world.

“I urge us to prayerfully and tenderly minister to the distress in our own United Methodist household, but reclaim today that the distress of every single human being is a priority of the living God,” he said.

“This is one of the most prophetic, pastoral, theologically insightful episcopal addresses that I’ve heard,” Devadhar said.

Pittsburgh Area Bishop Cynthia Moore Koikoi preached in morning worship, and she too referred to the denomination’s tensions over homosexuality.

But she asserted that God creates a “space for grace” that United Methodists should recognize and act within.

“The Commission on a Way Forward and our work with them is that space for grace,” she said.

This article first appeared in the United Methodist News Service on May 1, 2017.