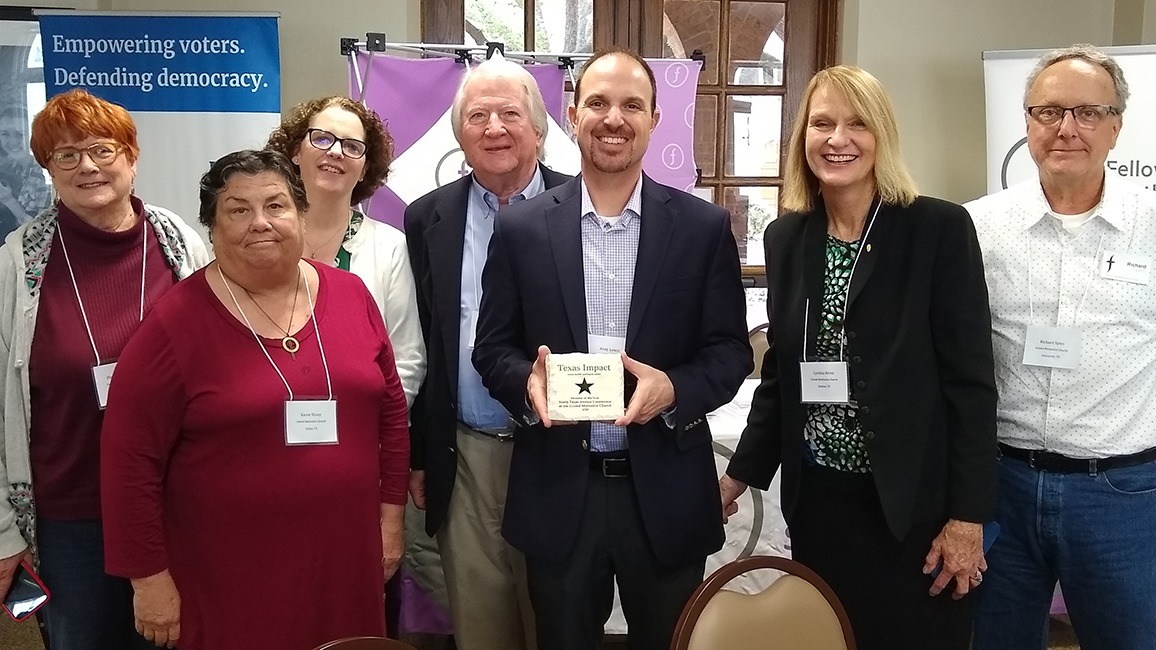 The North Texas Annual Conference on Monday received the Judicatory Member of the Year award from Texas Impact for its leadership role in instituting and leading in the development of the Courts and Ports program on the Texas/Mexico border.

Rev. Andy Lewis, director of the North Texas Conference’s Center for Missional Outreach and Assistant to the Bishop, accepted the award on behalf of the conference. He said the advocacy of clergy and laity from the NTC on behalf of immigrants in the past year was remarkable.

“We have seen prayer vigils at the I.C.E. offices in Dallas, a massive response to partner with other people of faith to provide housing and respite for people in the legal process of seeking asylum in Dallas, and recently an Immigration Summit that was attended by more than 400 people,” Rev. Lewis said. 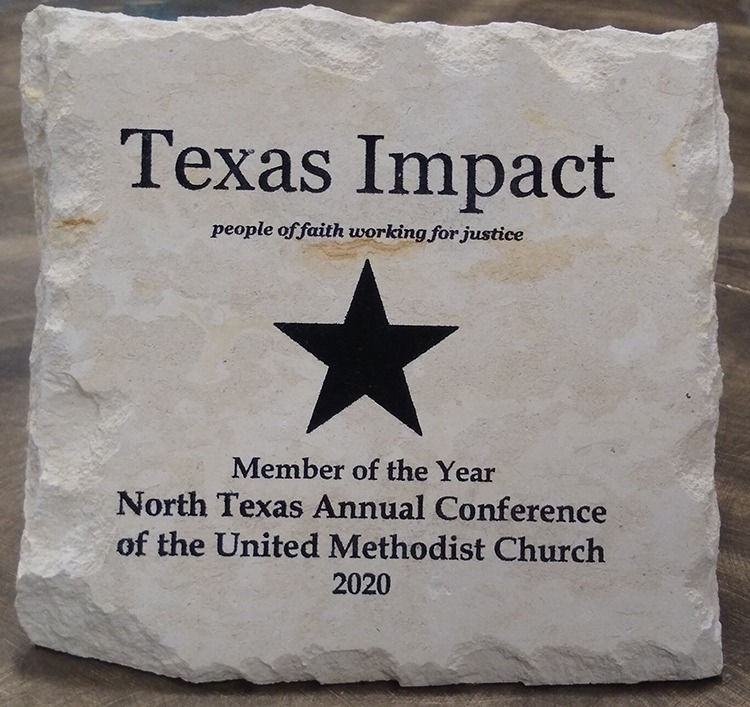 “This award belongs to the clergy and laity from North Texas who have stepped up and put their faith into action on behalf of our immigrant neighbors over the past couple of years. My hope is that we will build on our recent work and that our immigration-related ministry and advocacy will continue to grow in the years to come.”

More than 120 North Texas United Methodists have participated in the Courts and Ports program and are leaders in their local churches in educating others about the conditions facing prospective immigrants and advocating for fair treatment of those seeking asylum at our southern border.

The North Texas Conference has a longstanding commitment to advocacy work and ministry with its neighbors. So, too, is the conference known for its collaborative interfaith work alongside organizations such as Texas Impact.

Caraway has represented the North Texas Annual Conference on the Texas Impact board of directors for the last 18 years, including six years as president. Others from the North Texas Conference currently on the board include: Cynthia Rives of First UMC Denton and United Methodist Women, Rev. Mitchell Boone of White Rock UMC and Rev. J. D. Allen of Chapel Hill UMC.

For more than 30 years, Texas Impact has co-sponsored with the United Methodist Women of all the UMC conferences in Texas the annual UMW Legislative Event, a three-day advocacy training/issues forum/legislative engagement event. Several years ago, Lutheran members and later Episcopal members of Texas Impact requested a similar event. From that event emerged the idea for an Interfaith Advocacy Days event for Texas Impact’s increasingly diverse multi-faith membership.

This year, the first Interfaith Advocacy Days event took place in Austin at University Presbyterian Church with participants from multiple Christian denominations as well as members of the Jewish and Muslim faiths.

Other awards presented during Monday’s recognition luncheon include: