Community-Building In A Virtual Space 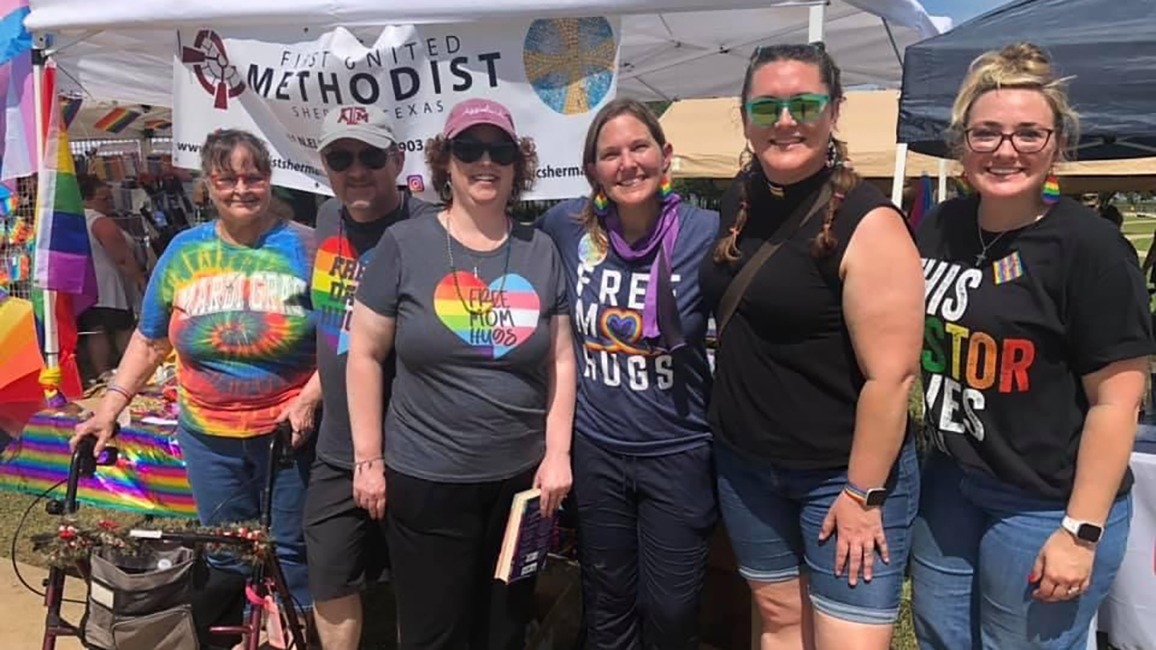 Facebook group launched by First UMC Sherman gives members of LGBTQ+ community and their allies a place to find hope, love and support

A growing online community that began as an outreach of First UMC Sherman has expanded across the United States and 10 countries worldwide. The “LGBTQ+ and Allies of First UMC Sherman” Facebook group was launched on July 21, 2020. They topped 100 members within the first week. Two weeks later, the group had 300 members and now, just past the one-year mark, there are more than 700 members.

When church member Annie Henderson first had the idea for this group, she approached First UMC Sherman’s Mosaic campus pastor, Rev. Abbey Echols, about getting involved. Together they mapped out their hopes and dreams for the group. Their goal from the start has been to ensure that members of the LGBTQ+ community know they are loved and to create a space where they can find hope from their community and a message of love and support from their pastors.

“My hope from the beginning was that this group could save lives and save families,” Henderson said.

Henderson and her partner, Sam, have found a spiritual home in Mosaic – the modern worship community at FUMC Sherman – and she hopes this Facebook group can help provide other LGBTQ+ people with the same kind of open space to engage their faith.

“Starting this group with Pastor Abbey was crucial, because it’s one thing to hear from someone else that is gay that it is okay to be a gay Christian, but I knew it would be meaningful to hear it from a straight pastor,” Henderson said. “Like so many others, being a member of the LGBTQIA community, there has always been a struggle between being able to live authentically and be accepted at church.”

Through sharing stories and struggles in the group as well as dialogue during a weekly Zoom gathering facilitated by Rev. Heather Gottas Moore, the Facebook group already has made headway in helping break down those barriers for people who have struggled to reconcile their identity and their faith.

Rev. Echols said she is honored to be on this journey with the LGBTQ+ community and allies, to share with them that God loves them, sees them and knows them by name.

“I have always been obsessed with our open table theology of the UMC,” Rev. Echols said, “where anyone and everyone is invited to the table of Communion no matter who you are, what language you speak, where you come from, what your skin color is, how much money you make [or don’t make], or how you show up in the world – YOU are invited to this table!”

Reflecting on how many people do not know they are welcome in the church, Rev. Echols said that her first conversation with Henderson about what they could do in this realm felt like an invitation from God to step into those vulnerable spaces with the LGBTQ+ community, their families and allies, and share that they do indeed have a place of belonging in this global church family.

Henderson, likewise, emphasized, “There are so many talents, wisdom and gifts that members of the LGBTQIA community have to offer our churches and community when we are accepted as equals.”

For Shannon Rennwanz, an ally member of the group, it is this opportunity to accept others as equals and love them as sisters and brothers that led her to join the Facebook group.

Rennwanz was raised Southern Baptist and stepped away from the church of her upbringing in 2017 because she could not reconcile what she was hearing from the pulpit with the God she knew. At that time, she was not aware of anyone in her life who identified as LGBTQ+. Since her daughter had begun attending youth ministry activities at FUMC Sherman, she began to learn more about the church, met with the youth minister and talked with others about the church’s stance. The Rennwanz family has been members ever since.

“I truly believe God put this on my heart because, this way, I’d know it was all Him,” Rennwanz said.

As a straight ally and source of support in the group, Rennwanz said she wanted to be involved to be one of the Christians that affirms not only her love for the LGBTQ+ members of the group but God’s unwavering love for them as well.

“I want to hug every single person in this group and tell them I’m sorry the church has failed you,; I want to do my part to make sure that changes,” she said.

The LGBTQ+ and Allies of First UMC Sherman Facebook Group