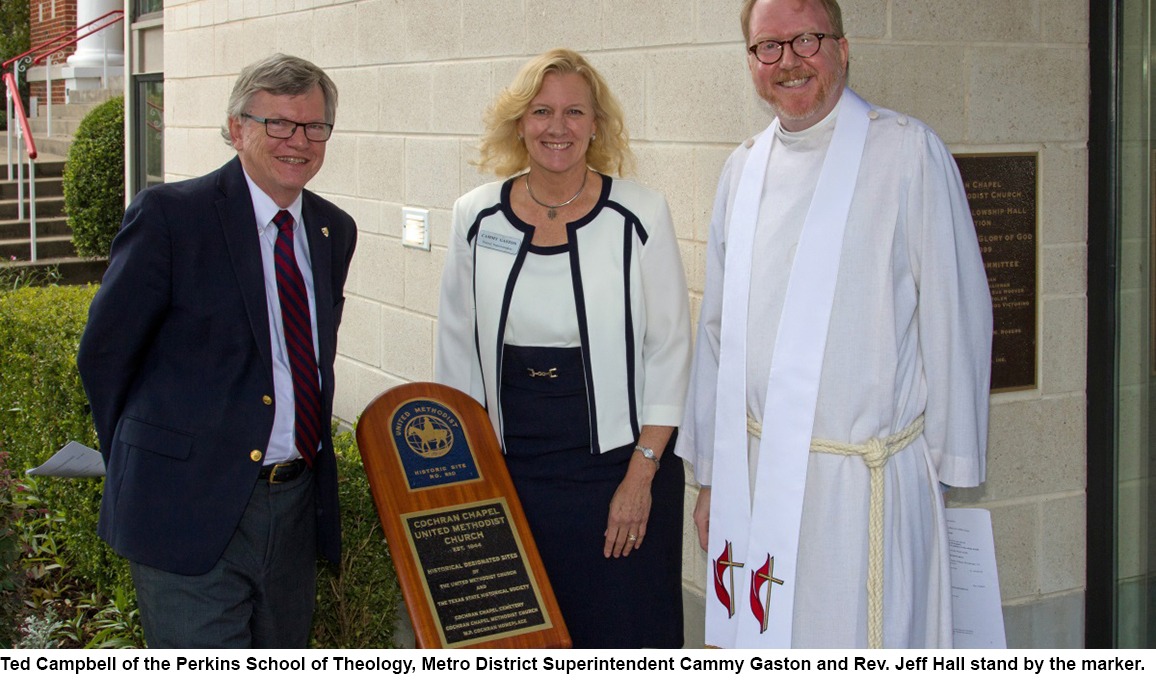 But it was also a birthday celebration for Methodism in Dallas, with the unveiling of a marker designating Cochran Chapel as Historical Site #530 of The United Methodist Church — not an easy honor to get.

Cochran was the first Methodist in what today is an international city. She gave the land for the oldest deeded church in Dallas.

Descendants of Cochran and her sisters attended the service in the sanctuary, where the stained-glass windows bear the names of family members. Howard Joe Cox, 92, is the last living descendant who still is an active member of Cochran Chapel.

In the early 1840s, Nancy Jane and her husband, William, left Tennessee for Missouri with plans to eventually buy farmland for $1.25 an acre. But soon they heard of a better deal — free land in a foreign country, the Republic of Texas, where the soil was fertile and the climate mild. They hitched oxen to a wagon, loaded it with provisions and set off with their three sons and infant girl for the Peters Colony. The trip to Texas, in early 1843, probably took six to seven weeks through wilderness, with only a few animal tracks or Native American trails to mark the way.

Soon, the Cochrans sent for Nancy Jane’s sister, Mary, and her husband, Isaac Webb, to come to Texas. The sisters and Webb formed a tiny cluster of Methodists. On March 19, 1844 — barely a year after the Cochrans arrived — the first Methodist traveling minister, Thomas Brown, visited the colony to preach a sermon in the Cochran cabin. That marked the start of the church.

In time, William, who experimented with different crops, became a successful farmer and so respected that he was elected county clerk and then a state legislator from the newly formed Dallas County. 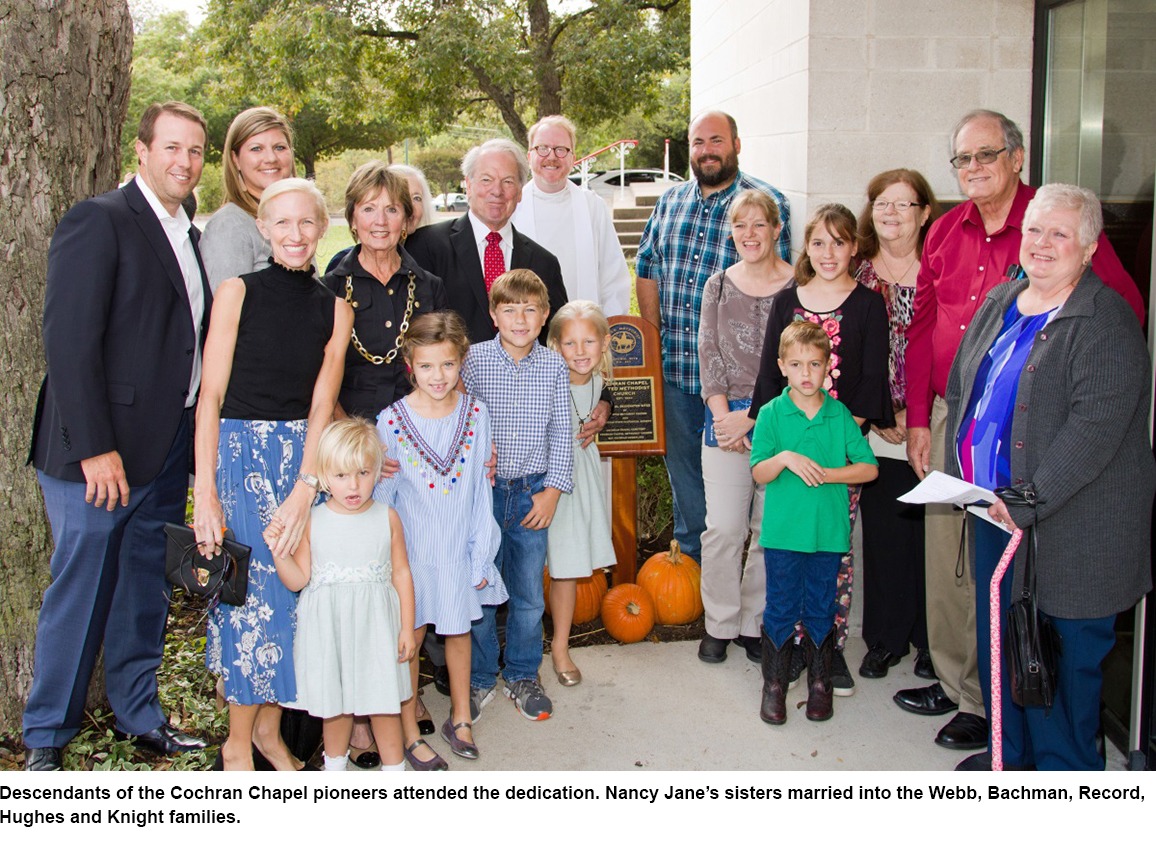 Being named a Historical Site of The United Methodist Church is no easy feat. In fact, on its website, the General Commission on Archives and History “counsels that the designation be bestowed sparingly.”

Member George Hendrix did much of the legwork for the four-page application. For starters, it asked about the original architect, original construction and original owner.

“The difficult bit gets into the supporting material. They want church history, pamphlets, newspapers — it’s a curious process in parts,” Rev. Hall said. They mined a church history written by descendant Anne Cochran and Anna Baker. “Then you have to have the support of the conference Commission on Archives and History.” 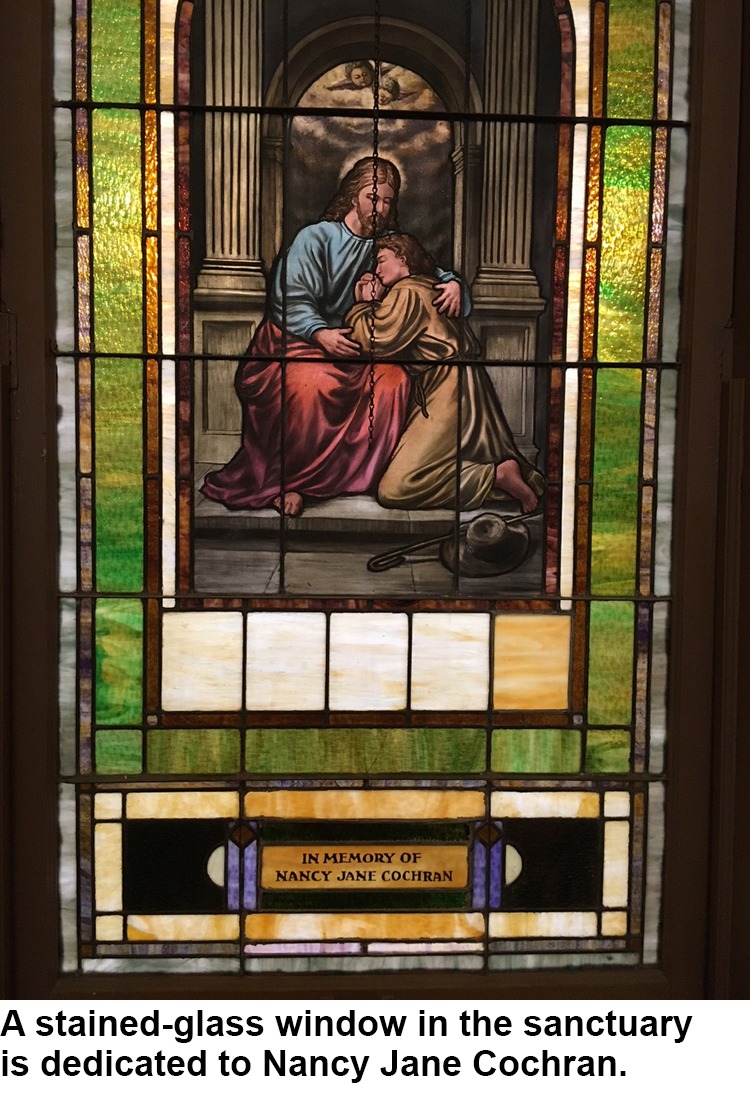 Once the resolution passed at the Annual Conference, the approval came surprisingly fast, Rev. Hall said.

Now Cochran Chapel is looking to the future.

“We’ve been in engaged holy conversation” through the Methodist Foundation, said Rev. Hall, examining “who are we, who are our neighbors and how is God calling us to serve our neighbors.”

“This is a dynamic and changing neighborhood,” with an influx of high-end housing as well as an established, predominantly Hispanic community, Rev. Hall said.

Mindful of Cochran Chapel’s past, Rev. Hall borrowed from Charles Wesley’s hymn “A Charge to Keep I Have”: “To serve the present age, our calling to fulfill.

More than a Sanctuary and Fellowship Hall

Nancy Jane Cochran would no doubt be pleased to see that today’s Cochran Chapel UMC sits on a campus of roughly nine acres on Midway Road near Northwest Highway. In addition to the main church, it’s home to: