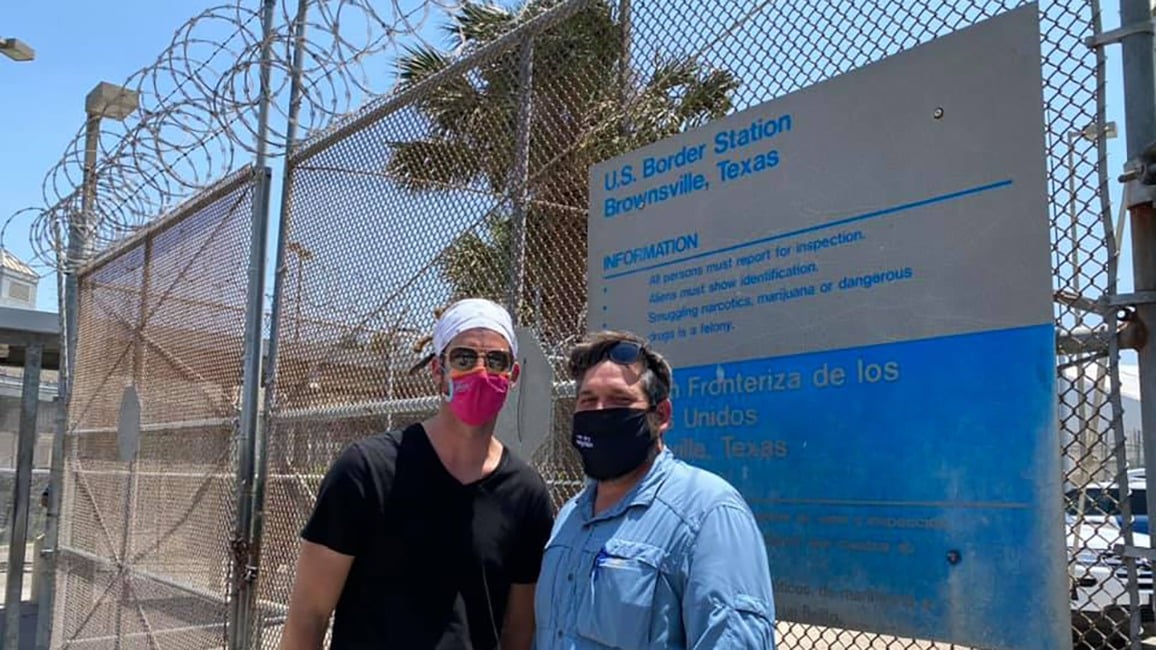 Rev. Phil Dieke shares his experiences of participating in a Courts and Ports trip

Ever since 2008, when the General Conference of The United Methodist Church voted to add the word “witness” to the liturgy for profession of membership in the local church, I have had a certain assumption about what it means for United Methodists to “pledge to witness.” However, after my recent Courts and Ports trip with Texas Impact, my understanding of what it means to witness is broadening.

My assumption has been that witness is to be interpreted as “openly professing one’s faith.” And while that may be true, the verb “to witness” can also be interpreted as “seeing (an event) take place.” When I was invited to the Rio Grande Valley by Texas Impact to “witness the crisis first hand,” this membership vow took on a new meaning for me.

Like many here in North Texas, I have been following the migrant crisis at the border primarily through mainstream news sources. Organizations, such as the General Board of Church and Society, have helped to fill in some gaps, but often the reports have been second, or third, hand information. Regardless of the source, rarely have the reports been positive. Thus, when the invitation to visit arose, I jumped at the opportunity. If I’ve learned anything as a United Methodist, it’s that experience matters. I may or may not believe what others are saying, but I trust that which I experience. And experiences were plentiful in the Valley.

Our first experience Monday morning was crossing the U.S./Mexcio border. Walking across the bridge from Brownsville to Matamoros took less than five minutes. Much to my surprise very little was happening at the border. We were told the encampment that housed more than 2,000 people at the border had been taken down once the Biden Administration ended the Migrant Protection Protocols (MPP). All that remained was a chain link fence topped with razor wire, marking the location of the former encampment. Nobody could explain why the fence was there.

Our purpose in Matamoros was to meet Glady. She oversees Asociación Ayudándoles A Triunfar, an organization that has been helping migrants primarily with legal assistance. In the 90 minutes we spent with Glady, many stood waiting for appointments while others stopped by to thank her and share that their asylum case had been approved and they’d be crossing the border that day. Glady walked us around the area where nearly every person stopped to speak with her. It was obvious she is loved in the neighborhood. 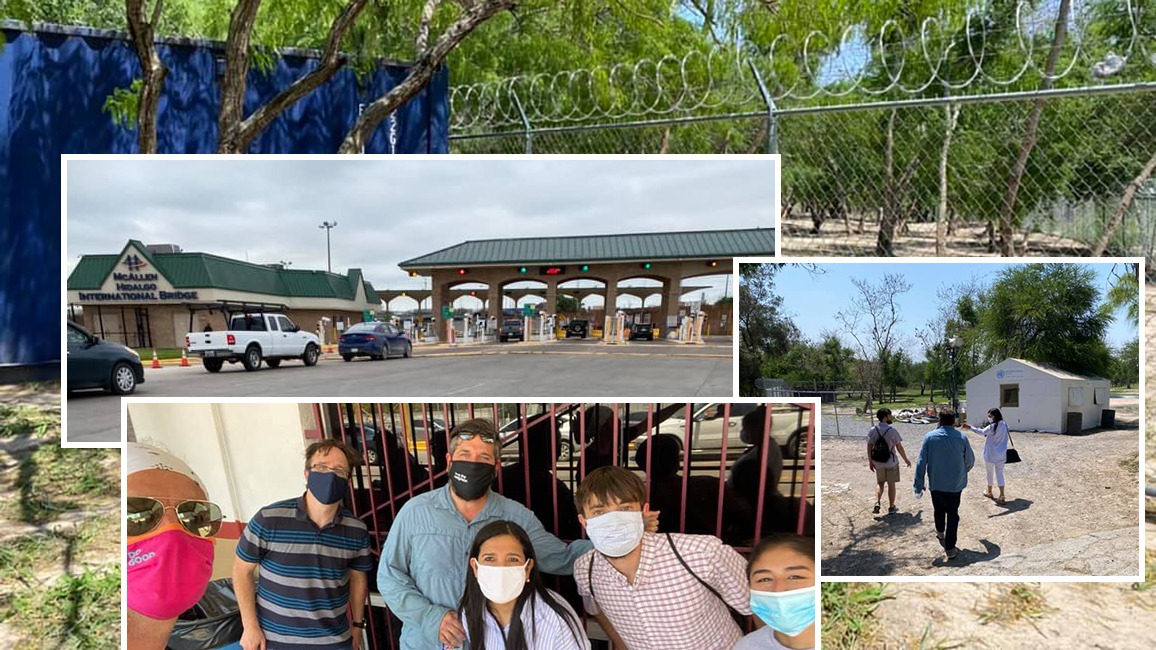 Upon returning to Brownsville we had lunch with Hugo Zurita, the Executive Director of Good Neighbor Settlement House in Brownsville. Hugo shared many of the frustrations they experience, primarily due to the lack of transparency and consistency from the current Administration. He also shared about the incredible collaborative work taking place between the City of Brownsville and non-governmental organizations (NGOs) like Good Neighbor, through what they call Team Brownsville. We had the chance to work with Team Brownsville at the bus station where we welcomed migrants by offering them backpacks filled with supplies.

It was at the bus station we met Miriam and her son, again. That morning, when we were with Glady, they had stopped by to thank her and let her know they were crossing that day. Just a few hours later there they were. While they waited for their bus we were able to hear her story, how she fled from Honduras due to rising violence and threats against her life. Over the course of 30 minutes she shared her two-year journey, one that would end at 4 a.m. the next morning when she would arrive at a Houston bus station with her son, to finally meet up with her family.

This was it. This was what we had come to witness first hand.

We did other things at the bus station as well. We packed backpacks, handed out water, we bought shoes to be distributed. Hugo had told us that was often the greatest need. All of these were great experiences, but in my opinion none compared to bearing witness to Miriam’s story.

Tuesday we spent the morning with Catholic Charities in McAllen. While there is impressive collaboration throughout the Rio Grande Valley between NGOs, in McAllen pretty much everything runs through Catholic Charities. We arrived at the Respite Center as those who had slept there were waking up and getting breakfast. While some of us sorted clothes, others helped these sojourners get a new set of clothes before they rushed off to catch their bus or plane to their final destination. It was both inspiring and overwhelming to witness the amount of people moving through the Center and the amount of volunteers it took to make it happen. 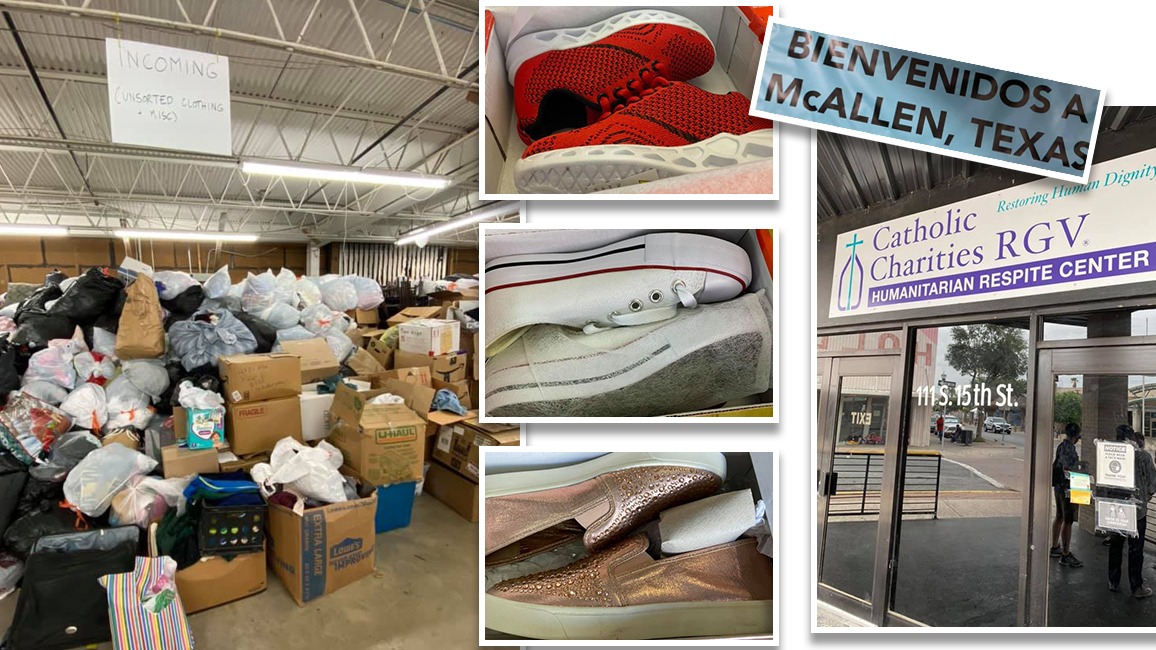 Donations allowed Dieke's group to buy 50 pairs of shoes to be handed out to the migrants.

Our final experience was witnessing, via Zoom, the sentencing phase of Federal Court. After watching for a couple hours we spoke with the Public Defender and the Federal Judge. Hearing them share their experiences, from vastly different perspectives, was helpful and frustrating. One of the things Glady kept telling us the day before was, “It’s all just so complicated.” Just when I thought I was understanding the situation, when I thought I had a well-established opinion, I would learn something new and I would be forced to reconsider the entire situation. It’s all just so complicated ...

As I have continued to reflect on all that we witnessed in those two days, I am confident my role now is to bear witness to my experiences. To share Miram’s story. To not only tell of the work of Team Brownsville, but figure out how we can do similar work in Dallas. To reach out to my elected officials and advocate for greater transparency and the human rights of these migrants.

Two days in the Valley did not give me a full understanding of the complexities of this crisis. However, it did give me the opportunity to fulfill this membership vow of witness. Not only did we “witness first hand the crisis at the border,” we also bore witness to our faith:

We loved and welcomed the sojourner.
We showed hospitality to strangers.
And we witnessed by “Welcoming the Migrant to the US” as we are called to do in #3281 of the 2016 Book of Resolutions.

Siblings in Christ … can I get a witness?

Sign up to claim a spot so you too can fill this vow of witness.

Hear more about our experiences here.