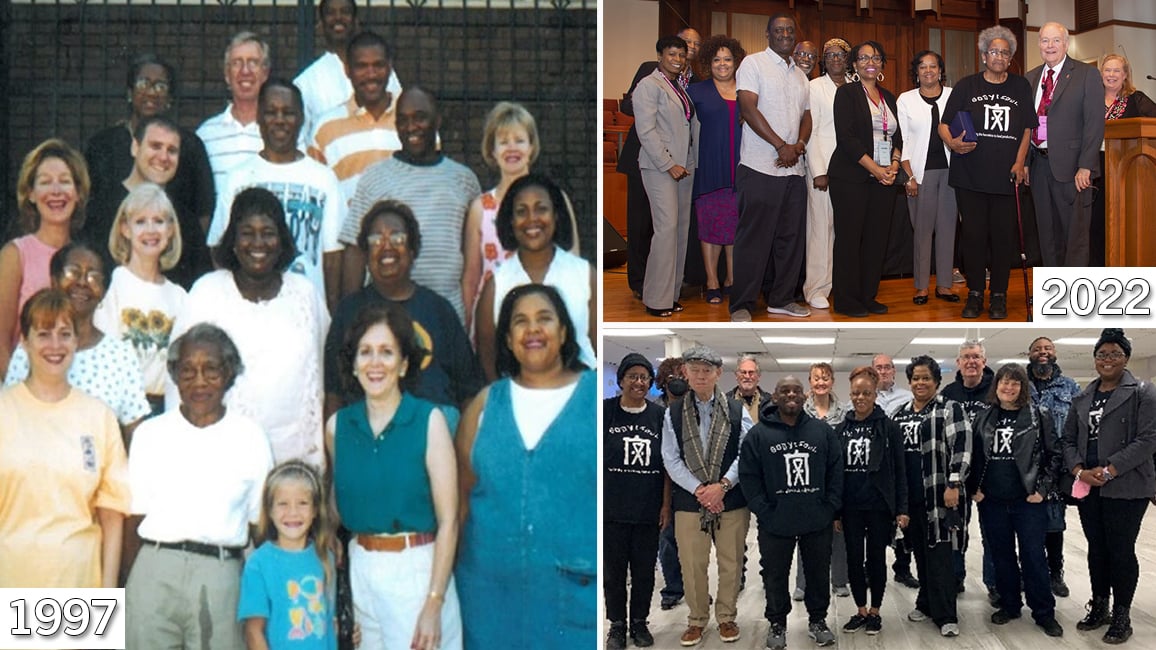 St. Paul UMC addresses the needs of the unsheltered community in the Arts District and Downtown Dallas areas

For 25 years, the Body and Soul Homeless Ministry at St. Paul UMC has served food, supplies and fellowship to people in downtown Dallas who are experiencing homelessness. This vital ministry fills a gap on weekends, as volunteers from area churches help serve breakfast on Saturday and dinner on Sunday.

The name Body and Soul is intended to encompass the care for the whole person. In addition to providing food, toiletries and clothes, there is time for spiritual conversation, Bible study, uplifting speaker series and other services that are tailored to the needs of unsheltered individuals. Body and Soul is rooted in the dignity of each person as a beloved child of God.

“It was the vision of Rev. Henry Masters to address the needs of the homeless community in the Arts District and Downtown Dallas areas when he was appointed to St. Paul UMC in 1997 that motivated my passion for the homeless,” said Leah Parker, founding director. “Under his leadership, we embraced his vision and determined that our relevancy was defined and dictated by our call as God’s people, as Christians, to impact the lives of persons experiencing homelessness.”

At Annual Conference 2022, Body and Soul received the Bishop Oden award, a North Texas Conference award named after Bishop William Oden, who served as bishop of the NTC from 1996 to 2004. The award recognizes those who exhibit Oden’s belief in interreligious cooperation and dialogue. St. Paul’s Body and Soul Ministry engages volunteers from churches and groups representing a wide cross-section of faith traditions. They embody Bishop Oden’s spirit of ecumenism as they care for those who are unsheltered.

Body and Soul has handed out:

More than 78,000 meals. More than 85,000 cups of coffee. Countless toiletries and clothing

The volunteers are an integral part of Body and Soul, and they are themselves transformed through the ministry.

Said Parker: “It is impossible to separate the lives of those who serve and the recipients of that service. The experience is embedded in a spiritual joy of being able ‘to serve’ and the hopefulness of those ‘being served.’  And many times, the line is blurred. Who is actually being served? When that concept is embraced and realized, transformation on both sides has been achieved.

“I believe the legacy of Body and Soul will be recorded as an outreach ministry that has and still is making a difference in the lives of our homeless brothers and sisters – such as it did with Roosevelt ‘Stickman’ Wilkerson."

On the streets, Roosevelt was known as “Stickman,” the homeless man who carved on tree sticks he found on the banks of the Trinity River. He joined St. Paul through the Body and Soul Art Program. With the help of a couple of Body and Soul volunteer community art enthusiasts, Roosevelt’s self-taught artistry of naïve art – a genre unbeknownst to him – propelled him to international fame. Carving and drawing the letters of each commandment, he developed his signature Ten Commandments walking stick. He said he had probably broken every one of the commandments, but it was his way of asking for forgiveness with each stick he carved.

Through the efforts of First Lady Laura Bush who owned one of his sticks, President Bush presented a walking stick to Pope Benedict XVI during a 2007 trip to the Vatican, and the rest was history. A remarkable story of a homeless man that discovered his talent, his purpose, moved off the streets into a home, deepened his love for Jesus Christ and transformed his life.

Body and Soul meets each person where they are, as they did with “Stickman,” offering hope and dignity.