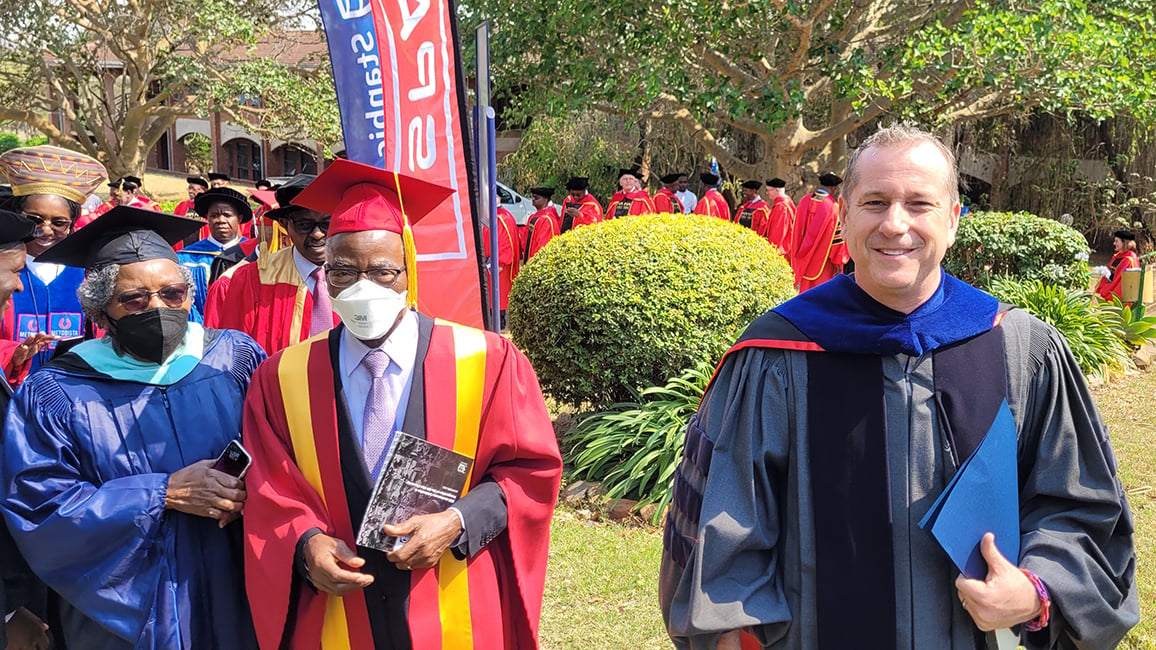 Rev. Dr. Owen K Ross is the Director of Church Development for the North Texas Conference.

“If you want to see the connection at work, come to Africa University,” Jim Salley, vice president of development of Africa University (AU), said at the celebration of AU’s 30th anniversary. The weekend of October 21-24, at the invitation of Dr. Salley, I joined with eight other United Methodists from North Texas to celebrate this momentous occasion in Old Mutare, Zimbabwe. The celebration was coupled with the inauguration of AU’s fifth vice-chancellor (university president), Rev. Dr. Professor Peter Mageto, an ordained United Methodist elder.

From a small school of theology and school of agriculture, AU has grown into one of the pre-eminent institutions of higher learning on the African continent with more than 3,000 students. The North Texas Conference has invested in that growth throughout AU’s 30-year history. Many congregations have invested in AU, and the campus boasts several buildings built by and named after Highland Park UMC. In addition to congregational donations, individual donations and scholarships provided by North Texas United Methodists, the North Texas Conference raised nearly $1 million to build the Alfred L. Norris Student Health Centre and to fund health science scholarship.

I was honored to be among those invited to represent the NTC at the 30th anniversary celebration. The weekend was full of worship, singing, celebration and thanksgiving. Bishops from around the world, General Secretaries and other United Methodist officials, representatives of the U.S. embassy, as well as dignitaries from the Zimbabwean government, joined to recognize the great contributions of AU to the African continent and beyond.

Jim Salley introduced me to the U.S. delegation as “an unlikely alum of Africa University.” In the fall of 2000, as part of my theological education at Perkins, I was fortunate enough to spend a semester studying at Africa University. That semester transformed the trajectory of my life and Latinx ministries in the NTC.

While the main impact of AU alumni by design is on the continent of Africa, AU graduates can be found contributing to communities around the globe. The NTC is blessed to have several AU graduates serving in our churches as clergy and laity. As the NTC has blessed AU, so AU has blessed the NTC.

One of the highlights of the weekend was when Bishop Mande Muyombo of the North Katanga Conference of the Democratic Republic of Congo “went off script” and asked, “I would like to know, who here is proud to be a United Methodist?” The tent was filled with applause and hallelujahs. Indeed, all of us in The United Methodist Church have reason to have a holy pride in the mighty work that God has done through us, through The United Methodist connection and through African University.