‘This is Serious, Man — Carnegie Hall in New York City!’ 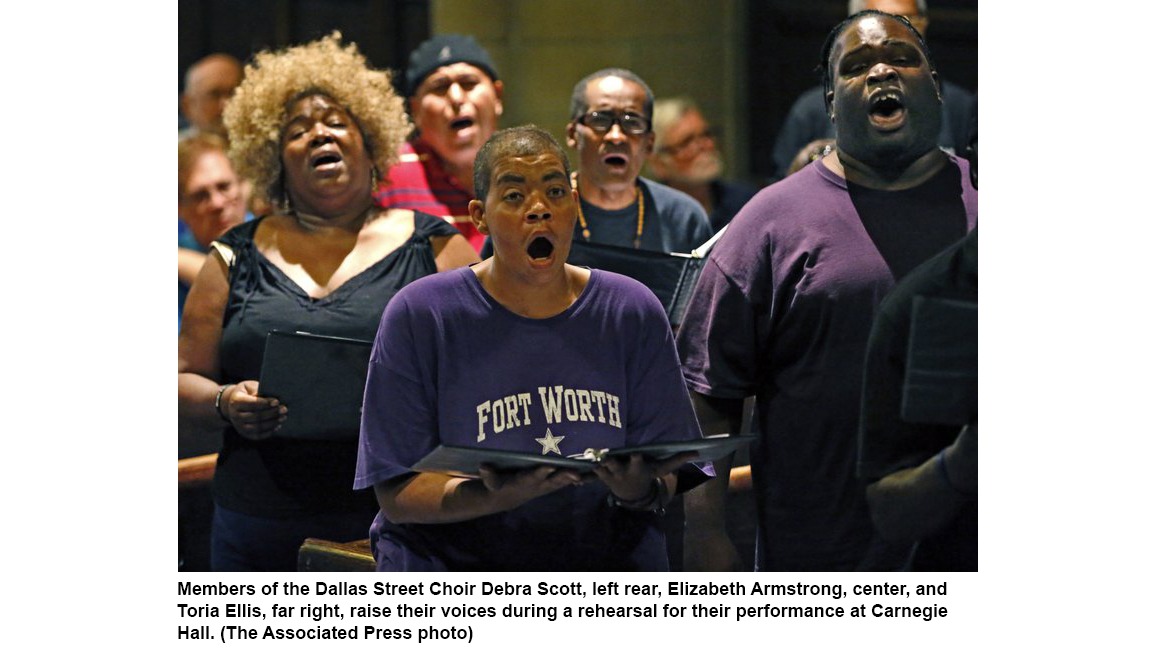 Editor’s note: Dr. Jonathan Palant is minister of music at Kessler Park UMC in Dallas and founder of the Dallas Street Choir.

NEW YORK, New  York (AP) — They’re homeless, but a group of men and women from Texas has made it to Carnegie Hall.

The storied New York City concert hall was the venue Wednesday evening for a performance by the Dallas Street Choir, all singers recruited from urban streets and homeless shelters who’ve been performing since 2015.

About 20 members of the choir were joined by 17 residents of a Manhattan homeless shelter.

The singers included Michael Brown, who lives under a bridge in Dallas when it rains and on a hilltop in sunny weather.

“We may be homeless, but we’re not voiceless,” he said at a rehearsal Tuesday, “so let’s use our effort to remind people that we still have hope and it will never die.” 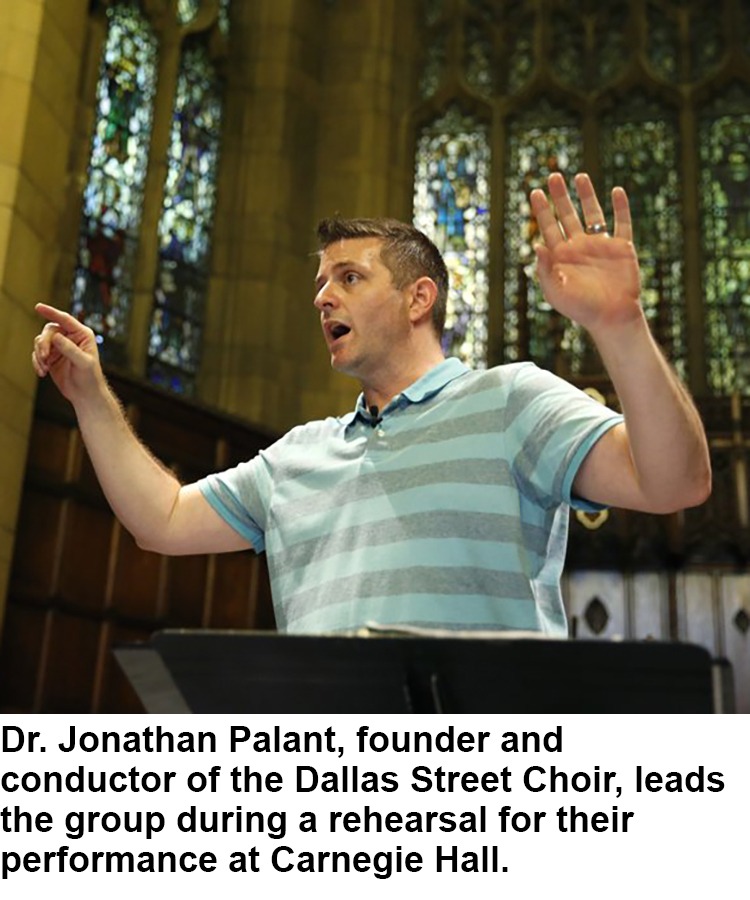 Palant said he got the idea for the choir a few years ago while volunteering with a homeless services organization. It started out as a Christmas event – a big meal at a homeless shelter with entertainment by a group of singers who rehearsed with Palant for just a few hours. But that inspired him to start a weekly musical session open to anyone who wanted to sing.

Members of the choir come and go frequently. They don’t always produce perfect sounds, and there are moments of slight cacophony, “but our members sing with heart like no other choir I’ve ever worked with,” said Palant.

Never in its 126-year history has a musical ensemble of homeless performers appeared at Carnegie, said the hall’s archivist, Gino Francesconi.

On Wednesday, they drew one of the most diverse audiences Carnegie Hall has ever seen: just about every race, religion and age, including a 3-month-old baby, and from wealthy New Yorkers to the nearly penniless homeless, rocking to the rhythms.

Brown got his first shower and haircut in weeks for the concert. Normally, he survives going to soup kitchens, and aims to get a job as a waiter.

He’s an energetic, bright-eyed choir member, while some others are physically frail; one woman relies on a walker, another uses a cane.

In Dallas, they rehearse each Wednesday morning, learning melodies by rote, with printed lyrics. They leave with snacks and a public transportation voucher.

The evening at Carnegie Hall was titled “Imagine a World — Music for Humanity.”

The homeless choir and Schwartz performed “For Good” from “Wicked,” along with Blackwell and von Stade. Rounding out the evening was the choir offering Broadway songs, capped by personal stories.

Tickets were $25 for any Carnegie seat, with proceeds going to organizations that support the homeless.

The New York City Department of Homeless Services donated some tickets so members of the homeless community could attend.

About $200,000 needed for the New York and Washington trips came from previous concerts in Texas, plus a private grant. Carnegie’s Weill Music Institute pulled in the homeless singers from Manhattan. The New Yorkers are members of a community choir and sang several numbers on the program.

At least while they were in New York, the singers had a roof over their heads – a hotel on Manhattan’s Upper West Side near the Valley Lodge shelter where the local performers live.

“This is serious, man — Carnegie Hall in New York City,” says Brown. “We have to show people that we didn’t come from Texas for no reason.”

For more information on the Dallas Street Choir