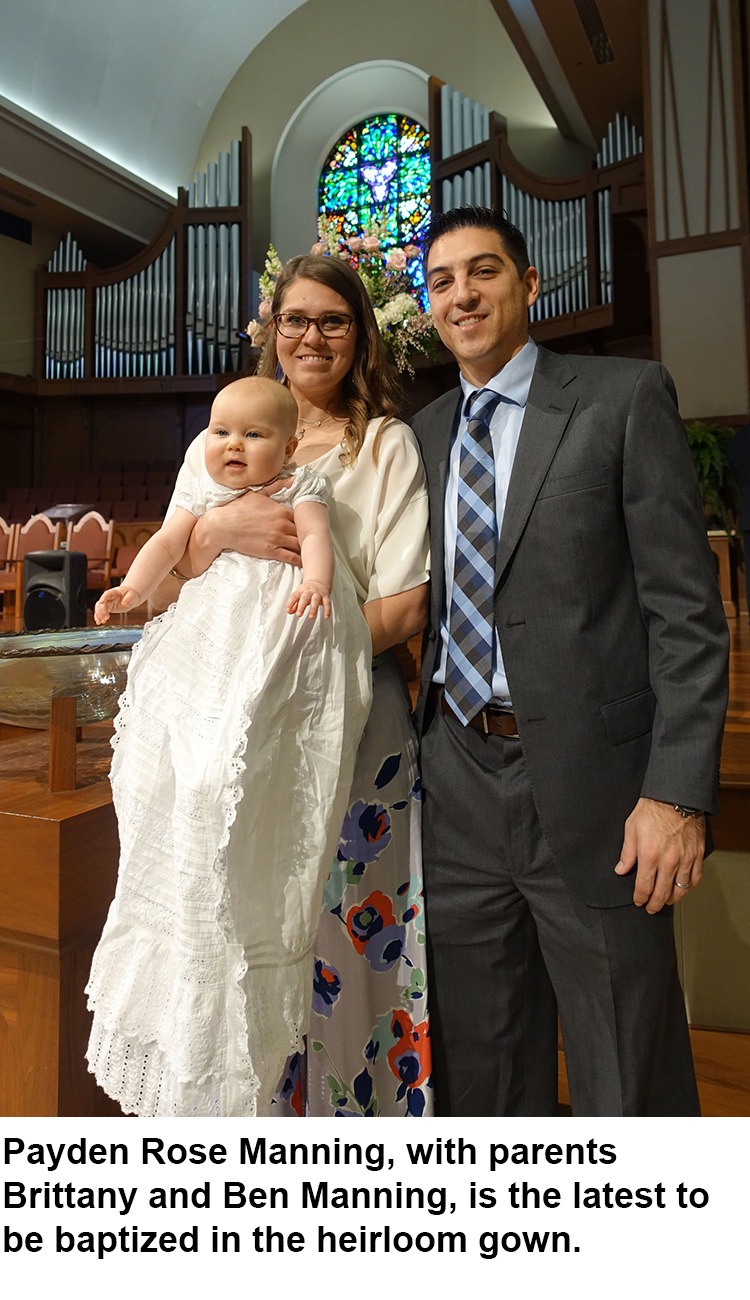 An heirloom baptismal gown made its debut at Christ UMC Plano in February as Payden Rose Manning, 6 months old, was baptized. The gown she wore traces back 150 years to her ancestors in England.

Payden’s great-great-great-great-grandparents, Thomas and Sarah Thawley, purchased the cotton gown in 1867 for the christening of their first child, Eunice, and the next 15 children born to them. Thomas was a proud member of his Methodist church, and documents note that he also gave a generous contribution to the building fund for the Methodist Central Hall in London.

Payden’s great-great-great-grandfather, Fenton, was baptized in the gown in 1870 and inherited it after his sister Eunice died in childbirth. Fenton stayed true to Methodism throughout his life and blessed the church with his musical talents. Fenton and his wife baptized all eight of their children in the gown. Family legend is that their younger daughters dressed their dolls in this gown on rainy days. The rest of the time, it was kept in a small leather suitcase, also passed down from Thomas and Sarah.

Payden’s great-great-grandmother, Ellen Thawley, Fenton’s eldest daughter, was next to inherit the gown. She was a talented soprano soloist in the church. She married Frank Clarke, a coal miner who was also Methodist. At a young age, Frank took it upon himself to raise money for missions and was quite good at it. After meeting Ellen, he felt the call 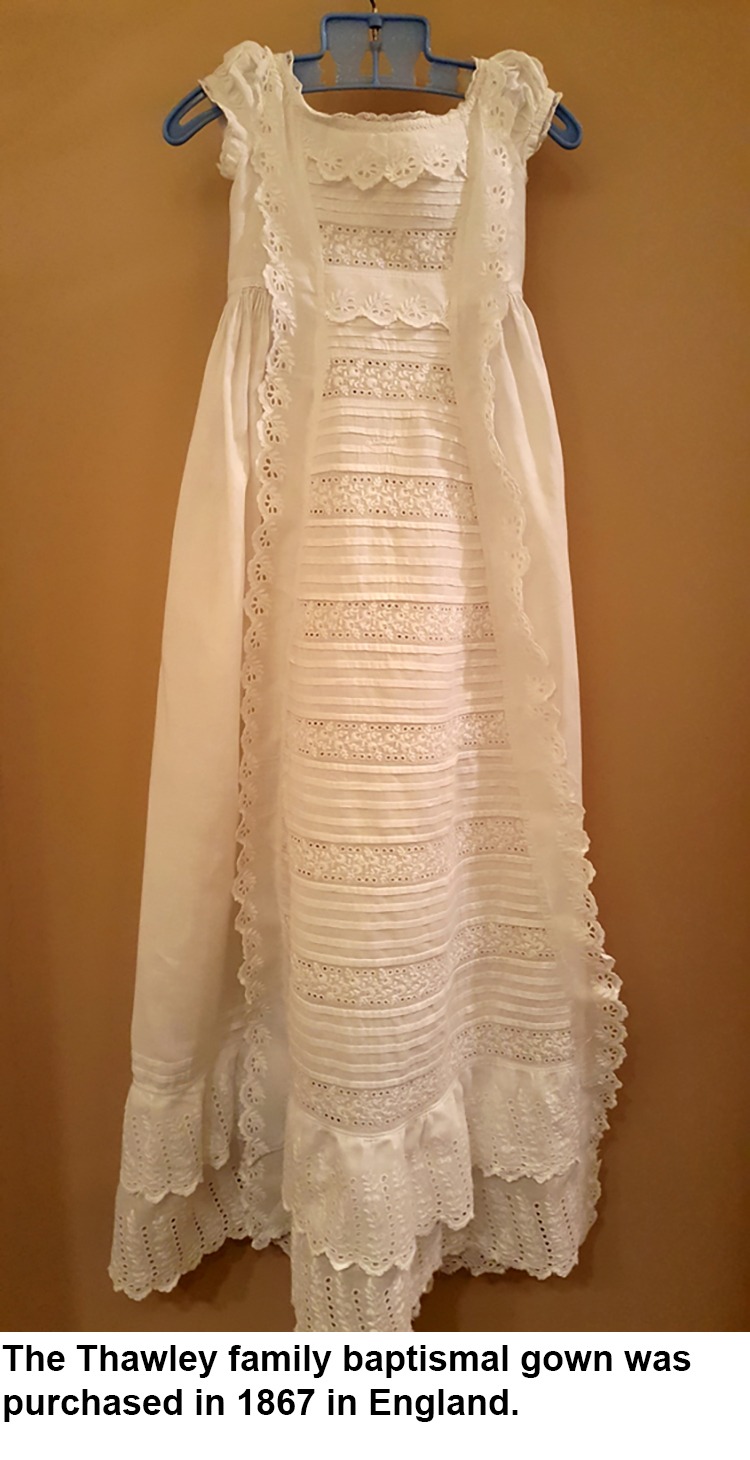 to preach and did so whenever and wherever he could. Eventually, someone who heard him preach suggested that he immigrate to America, where he could have a church of his own. In 1926, he left the coal mines, and he and Ellen moved to Ohio. He became a circuit rider for the Methodist conference, and his first charge comprised five churches in south central Ohio.  He walked and even ran to them for several months before acquiring his first car. Once in America, the gown was wrapped in tissue paper and stored in a white box.

Frank and Ellen’s first child, Wesley Clarke, Payden’s great-grandfather who will turn 90 in April, was also baptized in the gown. Wesley followed his father’s footsteps to become a Methodist minister, as did his younger brother Don. He stood proudly with the family as they gathered around Payden for her baptism.

Then there is my generation, the children of Wesley Clarke, and signs point to my two brothers and me being baptized in the gown as well. I remember my mother, Reva Clarke, handwashing, drip-drying and ironing the gown. (Family photos are stored away in Ohio.)

Both of my daughters, Tara and Brittany, and my niece were baptized in this gown. Brittany, Payden’s mother, was baptized by her grandfather and great-grandfather, both Methodist ministers, in 1986.

At Payden’s baptism, great-grandfather Wesley Clark took part by laying on hands along with Pastor Don Underwood. Both ministers recited the final line, ”I baptize you in the name of the Father and the Son and the Holy Spirit,” with Rev. Clarke adding: “God bless you. I love you very much.”

I am the keeper of the dress for now. This year I bought an archival box with archival tissue paper to store the gown in. I’ve placed an envelope with notes and pictures for future generations inside.

Over the years, the dress has held up nicely, although the fibers have thinned somewhat. It has had several holes repaired over the years, and elastic was added to the back waist lines to replace the cotton strings that once cinched it up. Per family tradition, it is my job to take care of the dress until Brittany or Tara has the first-born grandchild of their generation.

With Payden being the sixth generation and at least the 31st infant to wear this gown, the family continues 150 years of the joy and pride of seeing a child baptized to begin anew and carry on. We hope and pray that our descendants will be faithful enough that 100 years from now a baby will be baptized in this gown.